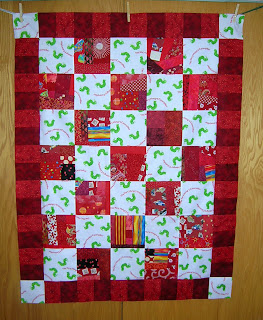 Here's a quilt made from red scraps, and the setting squares are the Very Hungry Caterpillar. (I read that book 400 bazillion times to my daughter back in the day.) I couldn't figure out a good border. I had these two reds; one was two orangey, and the other was too deep and "adult" looking. So I just put 'em together and they turned out cute and added to the scrappiness, don't you think? I was happy with this border! 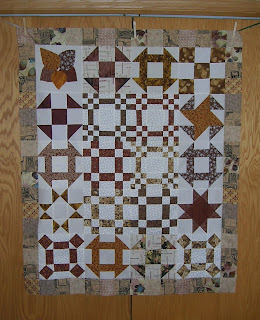 So I made a similar border on the next quilt. These are blocks I won in a Lotto. I finally put them together and decided to border them with squares like I'd done with the red. I like how this turned out, too! WooHoo! She's on a roll! (It's probably a cinnamon roll with frosting.) 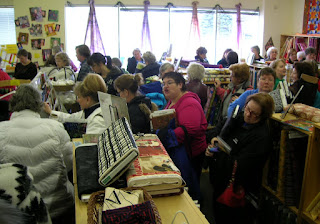 This is one of my activities from New Year's Day. A mob scene! But they were a pleasant and polite mob. Colorful Quilts in St. Paul is going out of business! Huge sadness! But today was the first day of the sale, and everyone in the Twin Cities wanted to be there to grab the best fabrics. I could barely get in to see the stuff on the shelves! But I didn't let that stop me. I bought umpteen yards of gorgeousness. It only took me about 25 minutes standing in line to pay. Before that, I forgot to notice the time. What the heck. We were all having fun, surrounded by fabric.

I dragged my hubby out to dinner, and we had a good time. That always happens. You'd think he would remember that it's fun! But the next time I ask him, he probably won't want to go again. We ate at Teresa's, a new Mexican restaurant nearby that has been working on opening F.O.R.E.V.E.R! I had almost given up hope. But was it ever worth the wait. Yum!! The food was delish. We ordered beef fajitas For Two. Isn't that cute and romantic? The leftovers in the fridge are calling to me right now...
Posted by Carol E. at 7:41 AM

I love the brown quilt! the border is lovely on the red too! Hmmm, stay warm in MN.

I LOVE that red scrappy quilt!

what a great bordering idea -- the mixed squares really do work well in both cases, pulling the whole together :-)

I am not going to comment on the quilts.... But Teresa's...finally open... is it authentic or more Mex-American? Just curious...by the way...the quilts or gorgeous! Smile!

I'm sorry to hear about Colorful Quilts. I got to visit the store a couple of years ago when I was in Minneapolis on business. Still have my frequent shopper card for the next time I got back that way.

So sorry Colorful Quilts is going out of business. I remember the trip I made with you and Kathleen. What fun we had that day! I bought fabric there for my entire staff. Remember to support your local quilt shops right now as biz is tough all over.

Good job on those borders! Love your solution to the problem of not having "just the right" fabric.

Kudos on your 400th post too. I've known about Heifer International for several years. They do good work. Glad to know that they've received another donation :- )

The borders are great! Mary Ellen Hopkins says that "reds clash well." I've made a point to live by that belief! ;-)

Sad that yet another quilt store must go out of business. It's scary!

I love that neutral-ish quilt -- and that reminds me that I have one that still needs to be quilted! Along with a stack of others... but it's more fun to play with new things, like the block party!