Finally, a book review! This long book took me the whole month to read! The Gilded Hour by Sara Donati


New York City, 1883. Two women are doctors, one of them is a surgeon! They also are free-thinking, strong, independent women - way ahead of their time. It was refreshing to read about women not bowing to the mores of the time: be submissive and fashionable and aspire only to marriage and motherhood. These women dress comfortably, eschewing corsets, and believe in the power of women. They practice among the poor of the city. The reader will get a good look at a New York much different from today's. It's teeming with tenements, poor and homeless people, orphans, news boys, garbage strewn along the streets, street cars and horse-drawn carriages. The only thing that is similar to today is chaotic traffic.

There is illness, death, romance, intrigue, and lots of social issues one could discuss from now 'til the cows come home. This historical fiction was well-researched. Some of the story line is an imagined life of the author's own ancestors whose real story no one knows.

This book is long - 750 pages! (I feel like I should get credit for having read at least three books.) It took me a whole month to read it! The best of it came in the last 200 pages; that is when I was captivated and couldn't put it down. A sequel is being written. 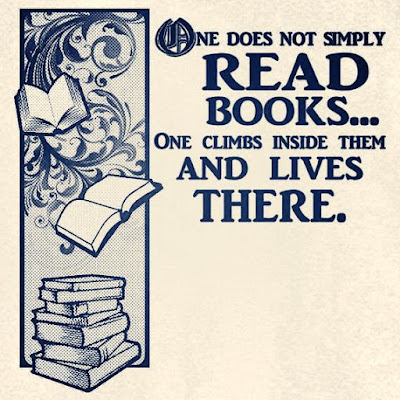 The family has started sorting through MIL's possessions, and I got back the three quilts I had made for her. 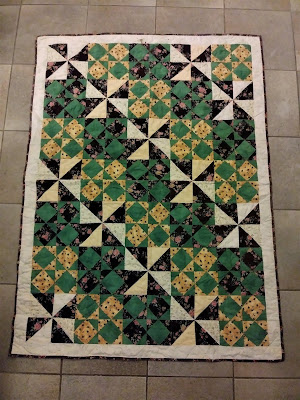 I think this is only the 2nd quilt I ever made, back in 2000. I hand quilted it. This was the quilt that taught me the importance of squaring up the pieces. I really struggled to get the parts sewn together and was so puzzled by that! (I finally learned about squaring up after this quilt was finished.) So I remember it being a frustrating process. Now looking at it, it seems not so bad, for all the struggles I remember having. 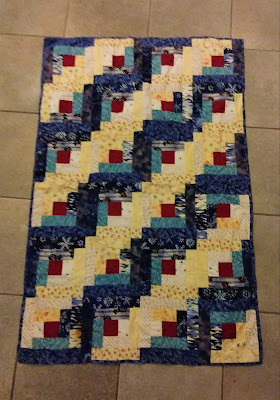 My in-laws lived in Florida at the time, and they liked using that first quilt on their laps when knees got cold while watching TV in the air conditioning. I was told they "fight over it" for knee-warming. Music to a quilter's ears, right?? So I made them another one in 2001. This is also hand-quilted. They now had a quilt for each set of knees. 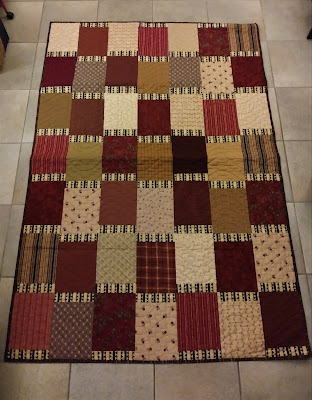 Ten years later, 2011, my in-laws had moved back to Minnesota; I noticed their sofa was a burgundy color. I had these fabrics on hand and decided they would go well with their couch. So it got made in time for their 61st wedding anniversary. By that time I had stopped hand quilting and had a machine quilter who was my go-to helper, Diane. Either Diane or a friend of hers developed this quilting pattern specifically for this quilt. I felt kinda proud about that. Photos of this quilt appeared in her book of patterns that she showed her customers. The quilt lived on my in-laws couch until now, when they have both passed away, and the quilts cam back to me.

This quilt looks nice with one of our living room chairs. Last night my hubby took a nap under it. I was pleased about that, as he hasn't been much of a quilt-user over the years. Of course, when it's -30 degrees F. outside, anyone can appreciate snuggling under a quilt, I suppose.

Yesterday my mother-in-law died. She had a stroke and hung on for about a week. She was 89, leaving behind her five adult children, 8 grandchildren and two great-grandchildren (another one due in April). She had been so resilient over many years, surviving serious conditions that we had expected to do her in long before this. What a tough lady!

It was a blessing that many of her family members could be with her in her final days. My children now have lost all four of their grandparents. It's sad, but they were lucky to have known all four of them into adulthood.

My husband has been so sweet to his mother. He has had his weepy moments but is overall doing OK.

Try not to take your loved ones for granted! (This advice is mostly for me.) 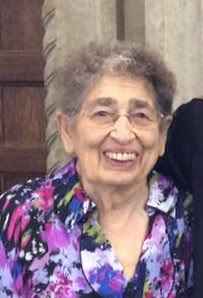 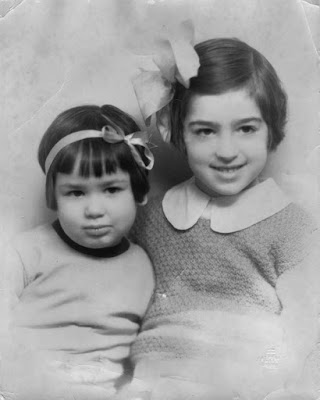 my MIL on left, age 2, with her sister, age 5. Sister preceded her in death.

I am finally actually doing the RSC (Rainbow Scrap Challenge) which I have loosely followed for years but never joined in until now. These are my January blocks. January's color was RED. I didn't know there was a Saturday link-up, so I'm late. I'll get the hang of it pretty soon. Check out the other RED blocks and projects here: RSC Scrap Happy Saturday. 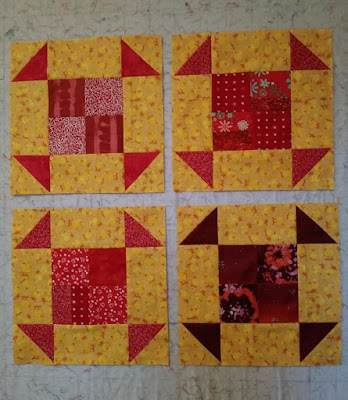 Not a Lot So Far

I am reading... but my book is 750 pages long! So I don't have a book review ready yet this month. And I am sewing... but I don't have many finishes to show. I can show you a few works in progress, though. 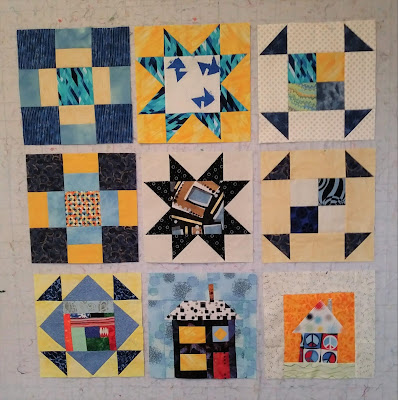 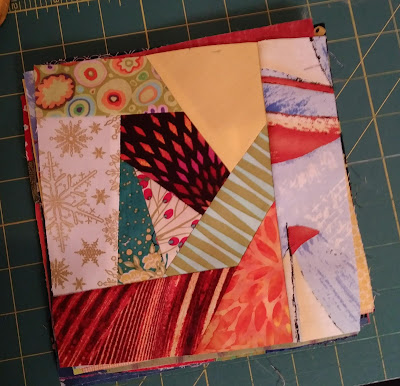 from top: January Lotto blocks for Sunshine, crumb blocks I made on a new $5 machine that my husband repaired.. I was testing it, and it works great now. 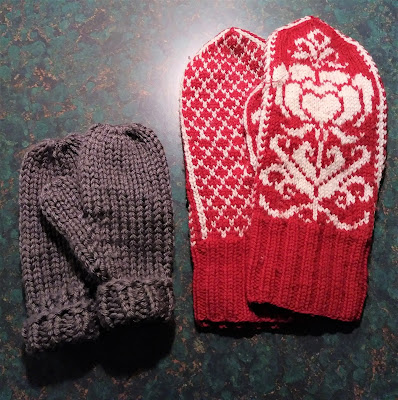 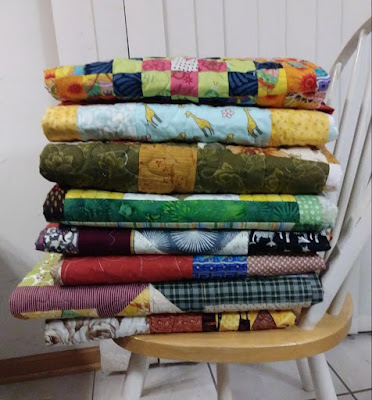 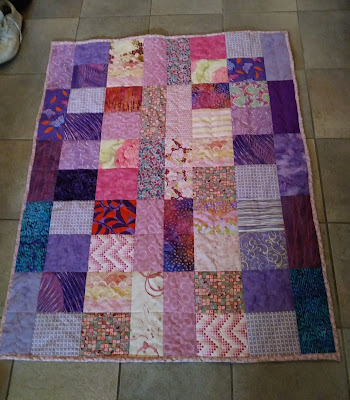 from top: my husband knit these gray mittens for Bonus (our Bonus grandson). They're so cute! Then it's a pile of finished quilts, made by huge collaboration of many piecers, assemblers, quilters, and binders. They're ready to send off to Quilts Beyond Borders and Wrap a Smile. Last, I think this is my first finished quilt in 2019. You'll be seeing a lot of pink for a while. I'm trying to use up my pink stash as it's not my favorite color.

This year I am going to participate in the Rainbow Scrap Challenge. I have been meaning to do this for years.. just never got my act together. Plus, I thought it was more complicated than it is. Just make blocks of your own choosing, using the color she announces for each month. The idea is to "use up" your scraps. We all know how impossible that is, but it's a good goal anyway.

I put a button in my sidebar. When you get to her blog, click on the RSC19 tab for the explanation.

January's color is RED! Let's get busy using up our scraps (or at least attempting to make a dent in them).

Here's a picture of her Sampler made in 2018 from her monthly scrap blocks. 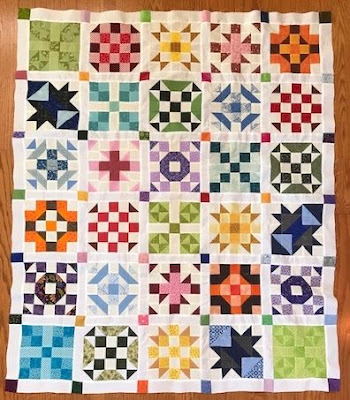 One year she did a rainbow Dear Jane! I'm not going to get this complicated. I don't know my plan yet, but it will be simple. 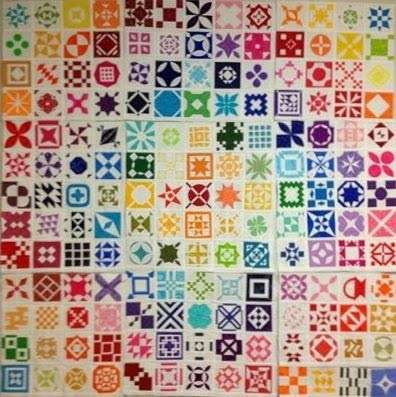