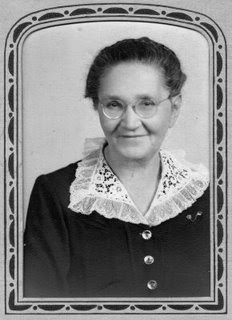 This is my husband's grandmother. She was from Alaska and was a Tlingit Indian, raised in a Catholic orphanage. We know nothing about her background. At one time the orphanage burned down, so there are no records. Sad. Wouldn't it be fascinating to learn about where she came from??? She married an Irish miner and moved to Minnesota and the rest is history. 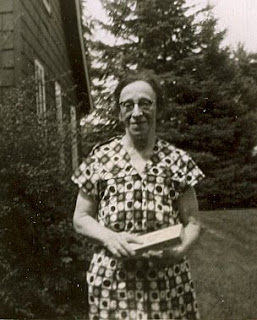 This is my grandmother. She came here from Ireland when she was a young woman. Alone. To look for a better life. How brave is that?! She met my grandfather, a man 20 years her senior who already had five children. She married him and became an instant mother. How brave is that?! She is the only grandparent I ever knew. All the rest died before I was born or when I was too young to remember them. And she died when I was 12, just before I was old enough to appreciate having a grandma. About a year after she died I began to realize what I had lost.
Posted by Carol E. at 7:35 AM

so, looking at your life, what will your granchildren say about it when they're your age? :-)

Oh neat pictures. I like what Quilt Pixie asked! I didn't really get to appreciate my grandparents, either...and my kids grandparents... well... So my plan is to be the best grandma in the world! lol

Even if our grandchildren had only photos, they still speak volumes. You can read from a face whether it has been a life of sorrow, joy or pain. The things we leave behind are like a natural history museum of our lives. I'm sorry your husband knows so little. I grew up in Alaska and have seen several documentaries on the Indians and their orphanages...it was a rough life on islands and abandoned WWII bases and camps. Tlingits and Haidas make up the majority of natives around Juneau and Douglas Island where I grew up. The 'Eskimoes' of course were farther north. See my labels on Alaska and making kuspuks with native children. I have a great affinity for people with such deep historic and mythological cultures. And the Irish are much the same in energy and history. So, there is a blending of the two women now passed on. They're both lovely and their faces show us show much about them.

Love the pictures Carol. I am very lucky when it comes to my grandparents, they are all still living. It's really interesting how the relationships change as you get older. You learn their faults and strengths, and just like parents, they lose their "no fault" status with you around your teenage years. I still see them, but not as frequently since I got married and had children of my own. All of my children will have at least gotten to meet all their great-grandparents on my side and may have the opportunity to know them. Growing up I knew both of my great grandmas and Emmy is actually named after them (Emma and Irene).

Jake has also known all of his grandparents, but had a very different relationship with his. He never felt a connection with them and knows my grandparents better then he knows his. His grandpa still lives out in California, but I haven't met him and Jake and I have been together for 10 years.

I think the change in relationships with the adults in your life from childhood to your teenage years and into adulthood is very interesting.

It is wonderful that you know some of your grandmother's heritage.
Both of my grandmother's had died (10+ years ago). I was fortunate enough to realize the gems they were (I was mid-teens - early 20's) when they died.
Wonderful pictures and great stories!

What a wonderful tribute to your grandparents. My husband's grandmother was his grandfather's second wife and he had 4 children so it was a similar situation. She called him Mr. all their married life and had 6 or 7 more children. I had 3 of my grandparents until I was an adult and loved their stories and knowing them. My maternal grandmother was a great quilter. I guess that is where we all get it from. Great post.

I'm lucky to still have the majority of my grandparents!

My dad's mother died several years ago, but I didn't know her well, and we generally considered her a "mean word that begins with a B and ends with a scratchy part."

Dad's Dad is now 91 and in great health and still very with it overall but with short term memory problems creeping in - once worked with Oppenheimer, is listed in America's Who's Who of Science, and is easily one of the smartest people I know. And step-grandmother is a hoot. Interesting story is that this grandfather and dad's mother divorced when dad was a little pup - dad found out about *his* dad when (my) dad was 35! -- Found out he had 5 brothers and sisters, too! So I gained a grandfather when I was 7!

Mom's parents have always been my favorite. I spent summers and lots of weekends with them, as they lived only 1 1/2 hours away. For the past several years, they've been 10+ hours or a continent away and it's been stressful. Grampa died at Thanksgiving (a good thing, actually), but Gram is doing well all by herself, with years left in her 87 year old self!

I've always enjoyed hearing their stories - when I heard that I'm part Indian, it was a surprise to my Mom, too! That was a part of the family history that just wasn't talked about "back then", so alot of it was lost.

Thanks for sharing, everyone!

My paternal grandma died when I was 10. I, however, knew her well even though we lived 400 miles apart: spent summers with her. When she died I knew she was watching me from heaven and wanted to be very good (perfect) so she wouldn't be embarassed in heaven. Too bad that didn't last very long. LOL Anyway, I thought my Grandma was the second most perfect person to have been on earth: I still do.

Hi Carol, both pictures are such treasures to have. I remember seeing the one of your grandmother back when we were talking about Orphan Train riders. I certainly would be lovely to have a written out history like Marjory left behind, wouldn't it? I can think of a million questions I would ask of my grandmother if I had the chance now. Hugs, Finn

My grandmothers were both unique women, they took care of their families, helped raise up the grandkids. They worked so much harder than I ever will. Farming, a restaurant, large families and a lot of baking. No quilting, some handwork - mending, lol. There was no time for hobbies really. Being old fashioned observers of traditional Sundays meant church, large noon meal and then rest, at least until it was time to do the milking! I miss them. Now, now we could do some serious talking and sharing how to do this, how to get through this or that difficulty, how to bake the worlds best Cinnamon Rolls...Gram Francis would just say "you do what you have to" you simply get through each day, take life as it comes.

HI Carol,
I loved reading your story about your grandmother- today I posted a story about my gran. I should have put a photo of gran on my blog but I have everything on film not on digital'
I was very fortunate to have my gran until I was 46 - many wonderful years of memories...
Thanks for sharing,
Regards,
Anna