Book Review: The End of the Ocean

Novel: The End of the Ocean by Maja Lunde

An audio book I got at a bargain price as a new user of the Chirp audio books app, I really enjoyed this book! The writing was great; several times I was struck by excellent metaphors and other language devices that make a book so rich. The narrators were also very good. I liked the fact that a woman read the female character's part and a man read the male character's part. The story takes place in the future, after humans have caused such destruction via global warming. People are living in crisis, running from fires and facing severe water shortages. There's a woman and her story from the past (probably around our current time), and there's a man and his young daughter trying to survive in the future, year 2041. It all seemed terrifyingly possible and realistic. A serious issue, but I kept a glimmer of hope throughout the book. I suppose that's because the lead characters had to rely on hope as well. 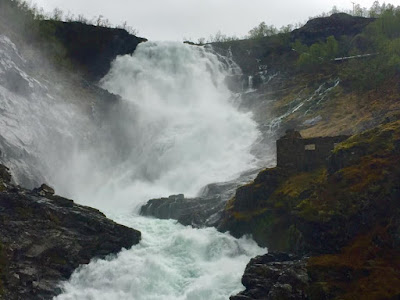 somewhere in Norway -- I hope we never need to worry about where to find water as they did in this book! (part of it took place in Norway)
Posted by Carol E. at 3:30 AM No comments:

This year I made two quilts for the Hands2Help Challenge. This first one went to Quilts of Compassion: 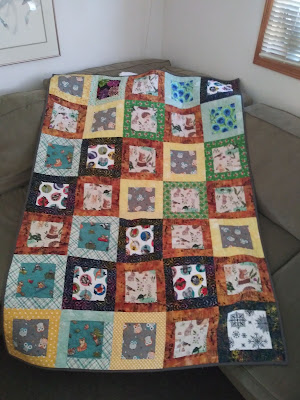 Another option was their idea to send a quilt to a local caregiver. I decided to give one to my friend who works in the mental health field. I'm sure it is quite a challenging job, and I'm betting that her patience and quiet approach are helpful to her clients and to herself. Still, no matter how well suited she is to the task, I'm sure it sometimes gets to be difficult. So I sent this one in the mail, and I will post her response below the pictures. 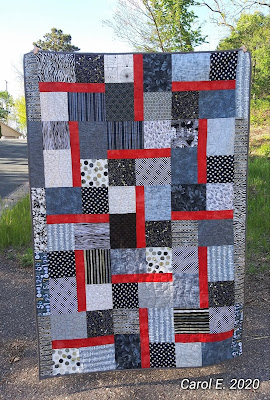 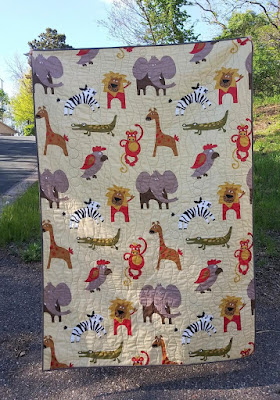 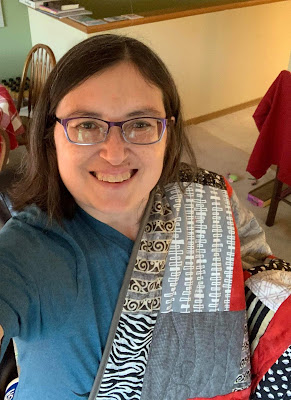 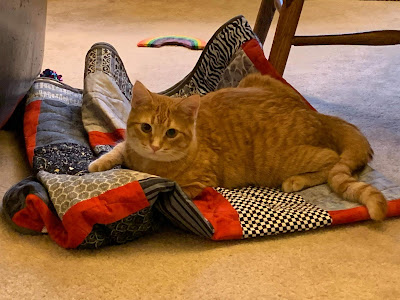 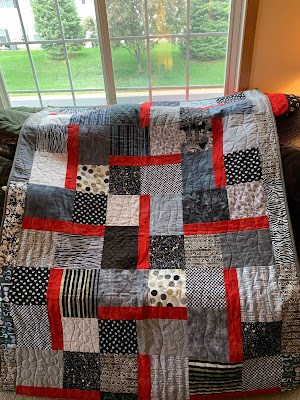 From my friend:
"Thank you so much for the wonderful gift that arrived today! You will never know how much that means to me. After a challenging week at work, this made my day. The quilt is so perfect in every way. I love that the animal print came from Panama."

The give-one-locally idea was fun as I got to experience her reaction. I'm very pleased that it was a hit.

This book takes place on a peninsula in north-eastern Russia very near and/or in the arctic - a peninsula that I never knew existed! However, I have recently learned some things about the Russian arctic, so some of the life styles in this book were a little familiar due to my recently-gained knowledge. It's always fun when my worlds of learning collide.

This one starts out with the disappearance of two young girls from a community in the southern part of this peninsula. The story then expands to include other families and groups within that same community. It also includes communities north of this one, hence the closer proximity to the arctic region where reindeer herding is a way of life.

The chapters bounce around between groups of people. It wasn't too jarring other than wishing to know the outcome of some of the previous situations; but then the reader gets caught up in the new chapter and new situations. It's a captivating book and good story that involves a lot of human emotion, struggles, joys, and sorrows. I give it 5 of 5 stars. 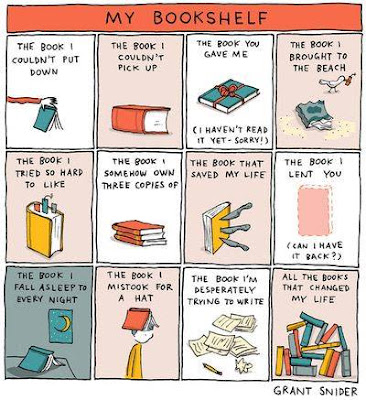 The Less People Know About Us: A Mystery of Betrayal, Family Secrets and Stolen Identity -- a memoir by Axton Betz-Hamilton

I vowed I was going to stop reading memoirs, but I'm glad I broke that vow. This one is fascinating. I had heard the entire story on a podcast, but knowing the whole story did not ruin my interest in the book. It reads like a captivating mystery in which I was constantly wondering "what happens next?" even though I knew.

The author grows up in a family whose identities were stolen, years before this was a common or even known crime. Their finances and entire lives are upended as a result. The author devotes her life and her career to unraveling her own story and researching the phenomenon, thereby becoming one of the earliest experts on the crime of stolen identities. Fascinating story. I recommend it. 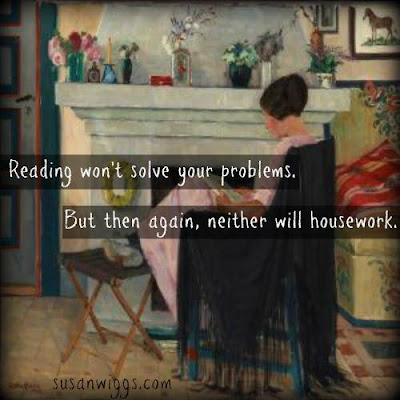 Quarantine Sewing - It's What I Do

More quarantine sewing.. I'm getting caught up on some things, but the more I get caught up, the more I find that I'm behind on, so it doesn't feel like progress. I'll keep plugging away at my to-do piles.

These quilts were all mostly finished, just needed some borders added. 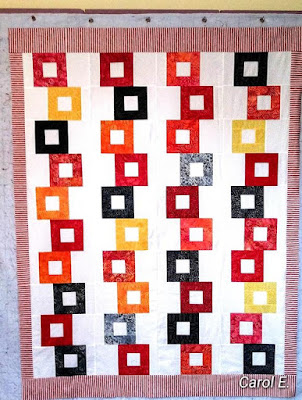 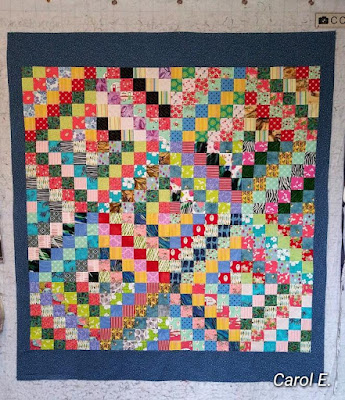 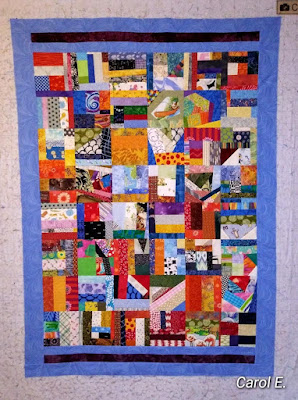 This one was made by my sister (the main part), and I just added the HSTs border. 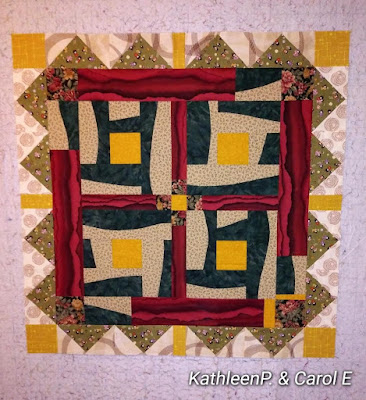 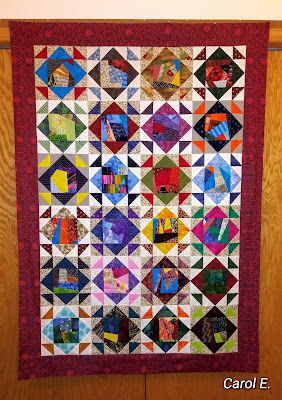 Book Review: And Then She Was Gone

a novel: And Then She Was Gone by Rosalind Noonan

An 11-year-old girl vanishes while walking home from school. She is not found until six years later. Reunification with her family is difficult and awkward. There is a lot of anxiety experienced by everyone in the family, except perhaps her father who is very mellow. Except he is also a high-energy fire fighter. It seems the author couldn't decide -- is he mellow or high energy?

I tried to put myself in the mother's shoes, wondering what it would be like to have a sudden return of a stranger, the daughter you missed desperately and with whom you dreamed of being reunited. The mother and daughter both struggled with reconnecting. Believable. But, I didn't like the mother character very much.

The daughter is 17 when she returns, and I kept thinking she seemed too mature for someone who had been snatched at 11, experienced trauma, and never completed school. Perhaps the author wanted us to believe that the girl matured quickly because of those experiences. Maybe. I can't explain human behavior and/or psychological responses to trauma. I could be wrong in this assessment.

Here's a weird thing: in the beginning when the girl is being snatched, we are given to believe that it is the first day she had permission to walk home alone from school. At the end of the book, it is claimed that the perp had stalked her for weeks to figure out her patterns and his snatching plan. There are many such inconsistencies in this book.

I would recommend using your reading time on other books. This one is "entertaining" but not great. 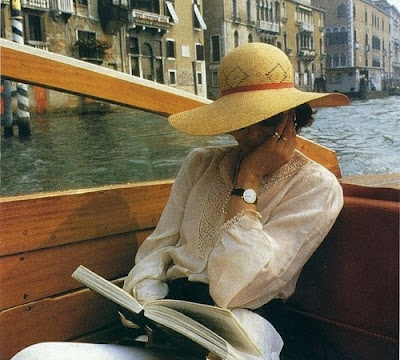