I wasn't really excited by that Photo-a-Day thing, so I quit! Too much effort. Sometimes those things inspire me; this one did not. So.. it isn't the first time and won't be the last that I announce at my blog: "I'M GOING TO DO THIS!!" and then don't do it. I'm pretty good at doing that, as a matter of fact.

So I'm impulsive. That's me.

Today I impulsively weighed myself and wasn't happy. I have gained two lbs in the last month. Gotta put a stop to that NOW. But guess what -- I am not going to announce any big weight loss/exercising/life style change here. Why? Because it would probably be another project that I would announce and then not do. I do want to be more careful, however. Gotta get serious about paying attention, at least.

Just realized: tomorrow is Friday, and I do not have a book to report on yet. I am reading What is the What by Dave Eggers, and I can tell you it's another excellent book, but I'm not very far into yet and for sure won't have it done by Friday. Watch for my review next Friday.

Today I went out for lunch with two friends. At first it was with just one friend. We all three were in the restaurant at the same time, but didn't know it. One was seated alone, waiting for her two friends to join her. Two of us were seated elsewhere, waiting for our third friend to join us. Finally our server offered to look around, and found a lone woman and asked if she was waiting for C & K. She was!! We'd been sitting in the same place, waiting for each other, for over half an hour. Sheesh.

Managed to have fun despite that strange beginning. Here is one of the joys of retirement -- well two of the joys: (1) We all 3 are retired so were able to plan a middle of the day lunch gathering on a week day; (2) while talking, a certain bookstore came up in the conversation, and we impulsively decided to just GO there. It wasn't close, but what the heck?? Retirement rocks.

Found some good things to purchase at the bookstore. I don't know if I have EVER gone into a bookstore and not purchased something. Those books call to me. And I have been on the lookout for chokecherry jelly and FOUND SOME AT THE BOOKSTORE! I was excited.

So that is my day; pretty dang exhilarating. And I'm glad I put a kibosh on the Photo-a-Day thing. I wasn't enjoying it anyway. 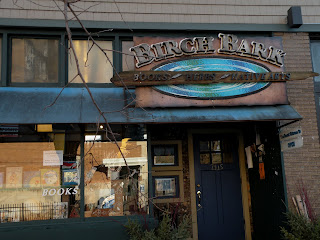 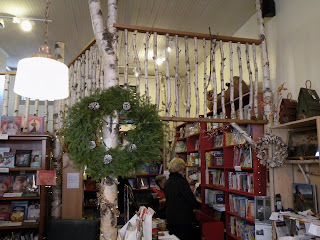 Yes, it is the lovely bookstore owned by famous author, Louise Erdrich - Birch Bark Books. Aren't I lucky I live close enough to go visit?? YES!! (Louise wasn't there, but it still was a fun trip.)
Posted by Carol E. at 10:40 PM

Erdrich has a book store in the Twin Cities! Is it a chain or a single store? Does she live in your area? I thought she lived in one of the Dakotas.

and Yes. NOT a chain! Independent bookstore, one of a kind. Yes, she lives in Minneapolis.

Thanks. Can't believe I had never looked at the web site before.