April A-Z Challenge: I is for Iraqi Bundles of Love

A few years ago a soldier in Iraq (son of a quilter), noticed that the local people have very limited access to regular supplies. He hatched a plan in which he could provide sewing and knitting supplies to the local women, compliments of Americans.

He put the feelers out, asked quilters and knitters to send supplies, and he was amazed beyond belief to receive over 3,000 boxes. Imagine his surprise! He had imagined a few coming in; he would stack them in his tiny bedroom and distribute them to women in the area where he served. But he had to find a warehouse, forklifts, trucks, and lots of helpers!!

Since then he has run the campaign 3 or 4 more times. The numbers he received were a tad more manageable: around 300-500 each time. I participated in that first one, and one more somewhere along the way. This week I'm sending another bundle. (They are now sent to another soldier as the original IBOL Guy is no longer in Iraq.) This time the bundles will be given to widows in Fulujah.

Why specifically widows? Well, women in Iraq have a hard life. Widows have it even harder. Their "worth" is measured by having a husband, so widows struggle greatly. That struck a chord in my heart, and I decided to participate again.

The women will be able to use the fabrics and yarn to make things for their families and -- who knows? -- maybe even sell an item or two. We were encouraged to slip in a toy or other things for kids as most widows will have children or will know some children who can use what we send. 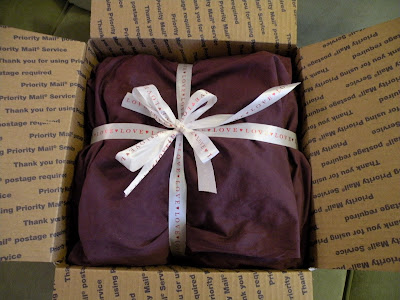 She will open it up and see this... I even had a ribbon that says Love on it! 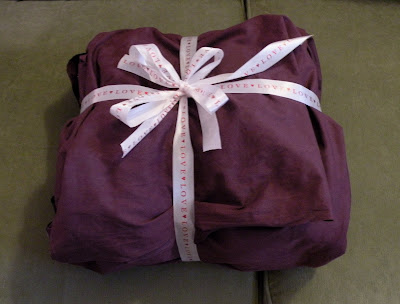 The bundle is easy to remove from the box. 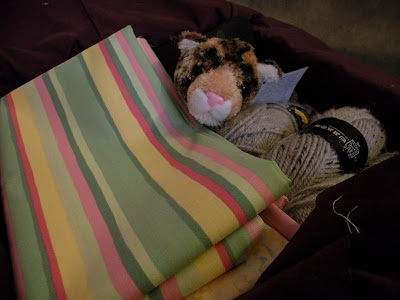 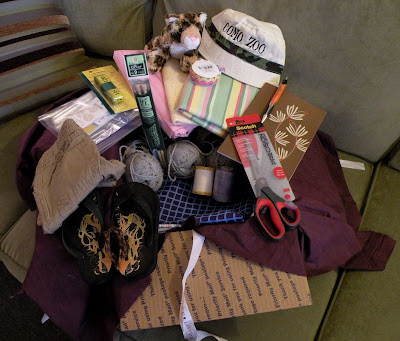 Contents: 6 pieces of fabric totalling almost 12 yards, 2 spools of thread, scissors, needles, buttons, tape measure, 3 skeins of yarn, 1 pair knitting needles, a kid-size pair of shorts, flip flops, a hat I got at Como Zoo, a blank book with a pen, a spool containing one length of ribbon and one of rick-rack, and even some extra zip-lock bags for whatever use she can find.

Doing this is loads of fun for me! I hope it's fun and useful stuff for the recipient as well.
Posted by Carol E. at 4:14 AM

What a sweet thought and package! Could you send me an address?