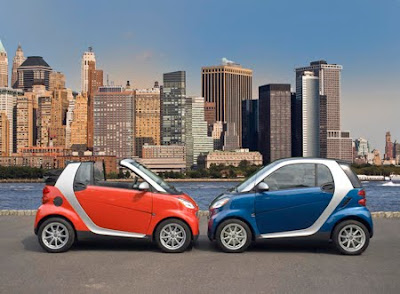 Smart Cars - I love these cute, little cars. I want one! (I've always been a small car girl.)

I have a lot of memories of cars. I was born in the 50s, so the first cars I can remember had those big fins on the back. And they always seemed very big. Of course, I was small and had to stretch to see out the windows.

We used to drive to our vacation spots. Once it was from Minnesota to the state of Washington. I was 9 years old. There were no seat belts and no freeways back then. So there was a lot of going through small towns, speeding up, slowing down, and we always had to pass another car if we wanted to move ahead. And we kids would wiggle and crawl all over the place.

We also had no air conditioning, so I can remember hot, hot days on family vacations, with all the windows wide open, and panting in that hot air blowing in on us, not cooling us down one bit.

I used to get car sick in the back seat. I never threw up, but I sure felt like it. My mom would let me get into the front (forcing a sibling to move into the back) and sit between her and my dad. I'd lie down with my head on mom's lap and gradually feel better. My sibs thought I was faking it, but Mom knew! I've had motion queasiness my whole life, though it's not severe.

The first time I ever saw Cruise Control was when I was about 12. I'm sure it was the hottest new thing. It was not very common yet. My friend's dad told me he could drive without having his foot on the gas pedal. I didn't believe him, so he set the Cruise, and lifted his foot in the air to show me. I was flabbergasted. It was still another ten years before cruise control was very widespread.

On family vacations while driving in the car we used to play the alphabet game (find all the letters of the alphabet, in order, on billboards, and be the first to get to Z.) We also had a lot of silly songs we would sing. Camp songs and other goofy kid songs with motions.

After I got married we carried on the tradition of road trips. Hubby and I and our kids would usually go camping here and there. Once Hubby and I and our first kid drove to Michigan, camping along the way. Our car was small, and child was four years old, still in a car seat. Hubby removed the back seat of our car, anchored the car seat in the emptiness and packed in our our camping stuff around her. She was a pretty good traveler, and that was a fun trip. Second child wasn't born yet at that time.

My dad used to like to trade in his cars fairly often. He liked cars. Mom got a little exasperated with him back then. I'd come home from school and there would be a new car in the driveway. I thought it was pretty cool. Now hubby and I keep cars until they are barely able to limp down the street, and then we break down and get a new one. Cars are not fun to pay for!

And overall, cars bore me. So I'm surprised I decided to write about cars! My current car is a Toyota Yaris, and I love it. I call it my little jelly bean.
Posted by Carol E. at 4:07 PM

Your jelly bean! hahahaa. I wish I could have a small car - but with 3 boys, 3 dogs and all the stuff we haul around...somedays I think I need a flatbed truck rather than the mini-van we have.

In our small town, we are seeing several of these. They seem to be OK for staying close to home. I saw our family Dr. in one. Naturally, he stays in town a lot. I presume he has a 'regular' car for going long distance. I'd like one also - so cute!!!!