a picture of someone who inspires me 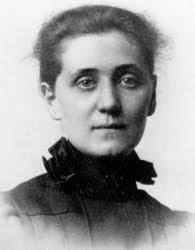 Jane Addams has been my hero ever since I read a book about her when I was about 9 years old. I would like to be more like Jane.. fearless and caring.

"Jane Addams was a pioneer in the field of social work and co-founder of the Hull House, a settlement house for lower class immigrants in Chicago. A noted pacifist and internationalist, Addams fearlessly took unpopular stances and became the first American woman ever to receive the Nobel Peace Prize." (Taken from a web site honoring women who have won the Nobel Prize.)
Posted by Carol E. at 9:48 AM

Maybe we read the same book! I remember I read it on an airplane when I was flying alone to visit relatives when I was about the same age. She is still my greatest hero. I've even visited her birthplace.