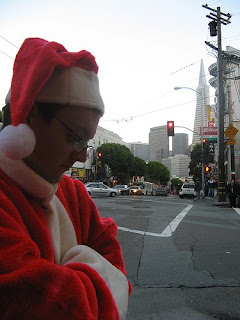 Today Santa Claus is sad. First, because he's apparently stuck in San Francisco where it's warm and there is no snow. Second, and even more importantly, he wanted to spring a surprise on a young woman (in a snowy state) who is really struggling. Her life is topsy turvy, and she is very close to becoming homeless. Santa's Helper went to her dwelling to give her some surprise gifts, but alas, she no longer lives there. Even Santa doesn't know where she is! He doesn't think she is homeless, not yet.... he hopes she is safe and not contemplating something silly like leaving the state before she completes her high school diploma. Her little baby needs her to persevere and get that diploma and have a fighting chance of scratching her way out of poverty.

Please say a prayer for the Girl With the Topsy Turvy Life and for Santa and his Helpers, that they can find a way to help her.
Posted by Carol E. at 4:09 PM

Poor Secret Santa...trying to do a good deed... Like you said...hopefully she is thinking logically!

So sorry to hear this story. No one ever should have to deal with things like this..no matter who they are! I hope Santa can track this young lady down and help her out!
Will say a prayer for them all! Lynn S.