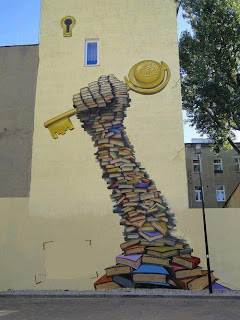 Books unlock doors (which is why it was illegal to teach slaves to read and write)!

This week I read Kindred by Octavia E. Butler. At first I didn't want to read it, because it is classified as "science fiction" which is not my usual cup of tea. But it sounded interesting, so I gave it a try.

What a good book! It is about a young black woman and her white husband. She finds herself suddenly being transported from the year 1976 back to the mid 1800s on a slave-owning plantation. As a black woman, she must adapt quickly to her new status and prepare for danger at every turn. She travels back and forth in time on several occasions, always back to the same plantation and then back to her home in 1976. Once her husband goes with her, causing new stresses as their perceived status inequalities put a strain on their relationship. Usually she "flies" solo. It is never her choice; she just goes. Boom. There she is.

The juxtaposition of the times was so interesting! Butler did a great job of conveying the fear and oppression and anger and very mixed emotions and experiences that happen among slaves, between slaves and slave owners, and of course, with a modern woman confronting a radically different past. I read the book in a day and a half. I could hardly put it down.

I so appreciate a well-told story that helps me further understand the nuances of our history. This one gets 5 stars.

Sounds like a good book. My take on time travel books is that the less explanation on the mechanics of the travel the better. The idea is the conflict of a modern person being forced to experience old societal standard, not the actual method of travel.

Right.. this one did not attempt to describe how the travel happened. If you think about it too much, it ruins the fantasy of making it really happen. It's fun to day dream about time travel, but, of course, is impossible to do.

I just placed a request for it at the library. One person ahead of me, but that will give me time to finish Mrs Lincoln's Dressmaker by Jennifer Chiaverini first. Thanks for the review!

I just finished Barbara Kingsolver's Flight Behavior and I do agree with you, I loved the book. When I turned the last page I didn't want it to end there, and then decided that that was the best place for it to end.