My Reaction -- The Talk 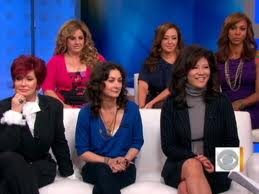 Since I'm retired now, I have the opportunity to watch daytime TV. One new show that I enjoy is The Talk. Five, sometimes six, women chat about current issues, life as a mom, and they have visitors on the show. I like their style and their friendly chat.

Once in a while, though, there are things said with which I disagree and to which I want to respond. The two incidents I can recall involve host Sharon Osbourne. Once, when asked if her husband ever did such-and-such, what would she do -- her response was "I'd kill him." The way she says it is kind of cute. It even makes people laugh. In fact, right when she said that, the camera focused on a woman in the audience saying to her friend, "I love her!" I think that's because of the cute factor.

I really think we need to be careful about such statements. Our society is already way too violent. It may seem like a silly, off-the-cuff comment, but these things add up and people (specifically, children) learn from what we say.

It's important to watch our language.. it helps define who we are and how we behave.

Today, while discussing the Arizona tragedy, Sharon said that if any of her kids did something that terrible, she would feel so awful about it, that she would kill herself. What?! In this age when we have such a teen-suicide problem, and we want them to know that there are other options when one is in pain, I feel that her comment was a very bad example, and hurtful.

SHE needs to model that life can be survived, pain can be overcome. We need to let our kids and our colleagues know that suicide should never be on their list of options. Help is available.

What do you think? Am I being overly sensitive, or do you agree that we need to be careful with the words we say?
Posted by Carol E. at 3:07 PM

I have never seen the show...but I do understand where she is probably coming from... I think she is saying that it would be so so very hard to live if one of her children did something that tragic... I think Sharon is impulsive type behavior...

You bring up a great point. Sometimes I think we go overboard with political correctness, but I agree that too many people think violence is acceptable. And they think they can say whatever crosses their mind. FILTERS PLEASE!

I don't turn the TV on because it gets to me.
Yes I believe words have POWER....do you want to take Sharon's words to heart? She is the wife of a rocker..what else is she known for or has she done?

I think most folks take her for what she is: entertainment not to be taken seriously.

I thing that when we speak figuratively we don't mean it literally, the crazies out there do! That's the difference. She wouldn't be out on TV if she hadn't been the wife of that guy.
I personally think that there are so many reality shows out there and they aren't reality at all, come on, who talks and acts like that?
But having said that...it's a tv show.

It says watch and comment. When you get to the page, a video will load, but below it is a place to add comments.