This Message is Being Delivered by Stage Coach

"Oh, oh the Wells Fargo Wagon is a-comin' down the street, oh please let it be for me!" You may recognize that song from The Music Man. Well, yesterday I learned a bunch about the old Wells Fargo Stage Coaches used in early American history. We "pals" of second graders (it's a volunteer thing I do) got to accompany our kid-pals to the Wells Fargo Museum in downtown Minneapolis. (My pal is the kid in the green T-shirt.) It was quite interesting!

Here is an actual former stage coach. This one was used in the Upstate New York area, refurbished in South Dakota, and now stands in the lobby area of the Wells Fargo Center in downtown Minneapolis. We were told that Wells Fargo owns about 20 of these actual stage coaches (around the country) from back in the day. The original stage coaches were all painted red and yellow by order of some guy who was in charge at the time, and that is why Wells Fargo still uses red and yellow for their colors today. 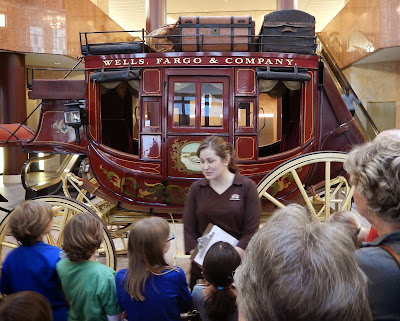 1. Do you know how much a one-way ticket from the "east" (let's say Ohio) to California would cost back in 1840s (Gold Rush era)?
2. Do you know how many people would ride in a stage coach? How many bags could they each take along?
3. How often would they stop for a refreshing stay in a hotel, to freshen up and rest before the next leg of their trip?
4. How long would a trip from Ohio to California take?
5. Who rides up front with the driver? What is hidden behind the driver's feet?
6. What was carried on the stage coaches that was even more important than the passengers? 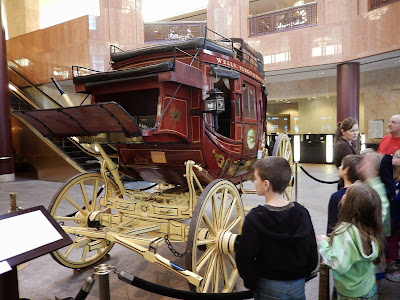 If you try, you can see a special box tucked in behind where the driver's feet would be. See it?

How many people do you think can fit in this stage coach? 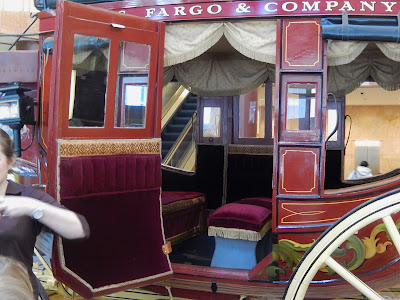 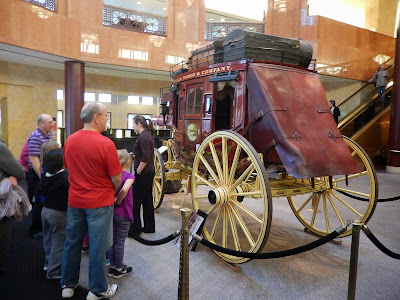 What is that sloped thing in the back called? (Hint: it's the trunk as they call it in England.) You're right, it's the boot.

Below you see a reproduction stage coach. The inside is exactly the same size as the real one we saw downstairs. The wheels and driver's seat and the boot are removed. The kids got to sit inside and then... the guide rocked the stage coach hard, and it rocked back and forth wildly. This reenacted what it felt like to sit inside the thing while traveling, trying to read, trying to sleep, trying to keep your lunch down, etc. It was amazingly uncomfortable, but of course the kids loved it! 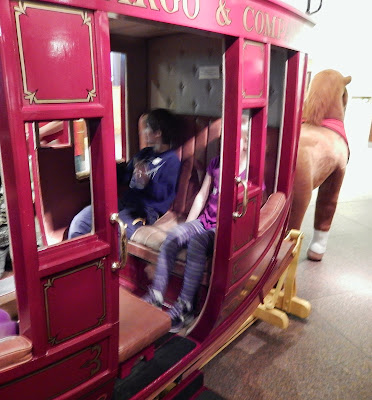 OK, now I will answer the questions.
1. A one-way ticket was $300! Back in the 1840s this was a LOT of money.. equivalent to several thousand dollars now.
2. Get this ... 18 people would ride in one stage coach! Whoever got there first got to sit inside. The late-comers had to sit ON TOP. They all paid the same rate, no matter where they sat. 9 would sit inside and 9 on top. They were told to bring rope, in case they had to tie themselves to the top. I cannot imagine how uncomfortable that must have been. Inside, they had to intertwine their knees so they'd have enough room to sit. Ugh. Each person was allowed one bag.
3. The trip went round-the-clock, straight through. They would only stop at Wells Fargo stages (hence the name, stage coach) for a 15-minute potty break, get fresh horses, and maybe grab a bite to eat (usually black beans in a kind of mush soup that would cost $1.50). If you were slow in the potty or slow eating your lunch, the stage coach would leave without you!
4. The trip took 3 weeks!
5. Behind the driver was the Treasure Box. Inside the box was gold! When miners found gold nuggets, it had to be melted and minted into gold bars and coins, all of which was done back east. Therefore the gold was carried back and forth on the coaches. It had to be kept as safe as possible and out of reach, behind the driver's feet. They also had another person sitting next to the driver. That person carried a shot gun, and his job was to protect that treasure box from bandits! This is where we get our still-current phrase of "riding shotgun" in a car - it means, next to the driver. Funny, yes? I never knew where that expression came from until today.
6. In the boot, the coach carried the U.S. Mail. The mail system paid a high price to have Wells Fargo carry the mail. It was considered even more important than the passengers, because of the money the postal system paid, and because it was important to protect and deliver the mail. (People waiting eagerly for mail would maybe sing like in The Music Man, "oh please let it be for me!") If the coach needed to carry lots of mail, it would take precedence and get room in the coach before a person!

Well, what an educational day it was for me! My little pal is full of energy and loves to always be first in line for everything, so he was often way ahead of me. We got to sit together on the bus to and from the museum, so then we chatted. I don't know if he learned as much as I did, but he sure did love riding in the bouncy reproduction stage coach!

Here's a picture of the beautiful ceiling above the refurbished stage coach. 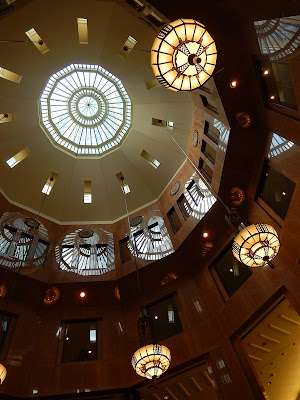 Thanks for attending today's history lesson!

This was a fascinating post! What a great museum ... I didn't know half that stuff. Thanks for sharing this adventure.
Kathy T. in Tampa

C, What a delightful post. I smiled from start to finish . . . and I love history! Thanks for sharing your day.

What a fun post! I didn't know many of the facts you presented. Fascinating!

It seems I'm much more interested in history A. since I left school and B. the older I get. hee hee!