Oh, For Crying Out Loud!! 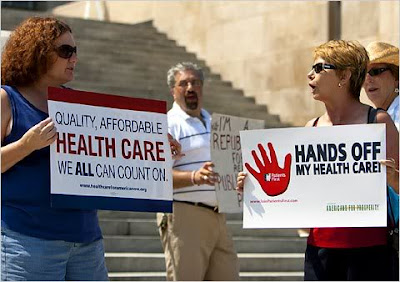 Which one looks vitriolic? -- photo from photobucket dot com

"Members of Congress Threatened.
Democratic lawmakers have received death threats and been the victims of vandalism because of their votes in favor of the health-care bill, lawmakers and law enforcement officials said Wednesday, as the Congressional debate over the issue headed toward a bitter and divisive conclusion."

I'm old enough to remember seeing the civil rights movement happening in our living rooms as we watched on TV. (I lived in a small town in a northern state, geographically removed from what was really happening, so I watched it on TV.) The hate-in-action was atrocious. Remember those faces of white people tensed with hatred, slinging their dagger-eyes on non-white children trying to go to school? We're seeing it again! Recently a mob of idiots heckled and spit upon respected legislators and civil rights leaders. I saw it on TV. They had to have police escorts to move around inside the capitol.

Is this a country of fools? People have actually said "health care (or health insurance) is not a right." What are they thinking?? Who is it supposed to be for? Only rich, white, land-owners? (Probably male, too.) Wake up, people. That kind of thinking died a LONG time ago!!!!!

I read another blurb from Sojourners which really got me thinking. In Switzerland they had a health care crisis similar to ours. Costs were rising astronomically. Bankruptcies were on the rise. They became alarmed and decided to fix the problem. This was in 1994. People were polarized then, too (but was it as bad as we are??). But now, in 2010, they all love the universal system they have and wouldn't go back.

Do you know what spawned the national outrage and insistence on change? It was because as costs rose, more and more people were un-insured. They were appalled when the percentage of un-insured rose to about 5% of the population. So they fixed it!

Our current law, if it is allowed to go forward, will, in NINE years, reach the wonderful level of 5% un-insured. That's when Switzerland became appalled. That's what we aim to achieve in NINE years.

This is so wrong. I'm so tired of idiocy going on in our politics. WE NEED TO TAKE CARE OF EACH OTHER! Why is that controversial?????
Posted by Carol E. at 7:43 PM

Thanks for posting this. I just don't understand all the controversy either. What is going on with our nation??

Carole,
I don't understand the reasoning by not wanting to have insurance- I live in Western Canada and we have universal health coverage- everyone has access- That doesn't mean there are no problems- but it does mean that no family is going to lose their house because they needed medical services. One of my little boys in grade one fell today and broke his arm- the ambulance came and took him to the hospital. Things happen and people need to have treatment without worrying about having a huge cost from being sick...
I would think it would be a good thing to have health care but ...
Just a view from a Canadian.
Regards,
Anna

I'm completely at a loss why people believe such completel and utter rubbish! Watching this from the other side of The Pond has me wondering why these people cannot, just cannot, see beyond the end of their noses.

The behavior I've seen is so embarrassing. I would not know how to explain it to someone from another country.

My opinion for what its worth is that people are selfish and unthinking. They do not stop to examine the real issues but pick up on what they want to hear (or see). There is a french expression attributed to Louis XV "après moi la déluge" which roughly translated says "after me come the floods". It is an expression which shows the psychology of those who ruin people (and the earth) with no thought for tomorrow (or others). As long as health care is big business I fear that the situation will not change significantly. Not to sound smug, I am glad to be a Canadian - our system has flaws but at least we do not have to worry about not being able to afford health care.

I love a girl with a strong opinion who handles her own strength with respect!

People are afraid of change (as in they fear more for themselves than they do for "the other guy"). That explains it all.

My FAVORITE argument is that the middle class is the one's that are going to suffer from this. Um, pretty sure most of the people who don't have insurance are middle class people who are independent contractors, etc.

My favorite part of the health care reform: Emmy can't be denied insurance because of her medical conditions. This was a major worry for me and something that may have affected us if Jake decided to get a job with a different company. Now, no longer a concern. Emmy can get the care she needs despite her wide array of pre-existing conditions. WA-HOO!

Carole, I am a conservative reader, so I usually move on to other blogs when you post political issues. Today, I need to speak up and say that I do agree WE have to take care of each other...I just want to do that with less government involvement. Hopefully the intelligent moderates ON BOTH SIDES will work together for positive change, and let the blowhards talk themselves to death :-)

I agree we need health care reform, especially in our country that has so much going for it. The controversy is in the way it is being done, with so many secret deals & special favors and exemptions. People don't trust the politicians, with good reason. The government does not have a good track record with managing OUR money. Louise