I have no book report today, but I do have two quilt finishes and then some brief thoughts on the history of today, fifty years ago.

I finished the binding on these two quilts. I'm pleased with how they turned out; they were nicely quilted by Quilted Treasures in Rogers, Minnesota. 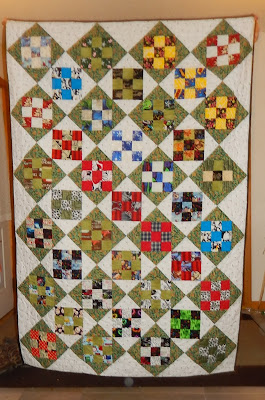 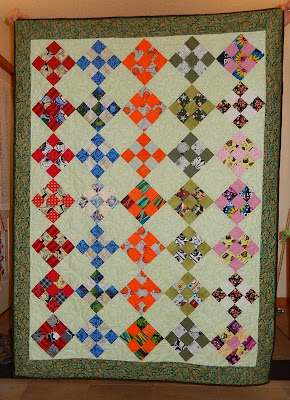 Everyone who doesn't have their head in the sand knows that today is the 50th anniversary of the assassination of President John F. Kennedy. So I will briefly share with you my Kennedy assassination week memories.

I was 11 years old and in the 6th grade... old enough to understand that what had happened was shocking and horrible. (I had no understanding of the politics and the factions of disagreement and the goings on that may have led to this, of course.. only knew that it was a terrible thing.) The school office broadcast the radio announcements over the PA system. After a while we all were sent to the gym for free play time, because the teachers were unable to carry on.

Like everyone else in America that day and that week, my family and I watched the news very attentively. On Monday when it was the day of Kennedy's funeral, my best friend's father died very suddenly. He was a well known and well liked man in our small town. That poor town had two big shocks that week. And of course, it forever altered my friend's life. She was also 11, and losing her dad was huge.

Since then I can't think of the Kennedy assassination without also thinking of my friend and her family's big loss. The memories are closely tied together. Today I especially think of my friend, L, and her siblings who have an important anniversary this week. May they feel warmed by happy memories of their dad.

Mary, who owns Quilted Treasures, is a good, good friend of mine. she doesn't do the quilting, but she's a great gal and runs a wonderful shop. I'm hoping to teach at her shop after our move. Cute quilt BTW.