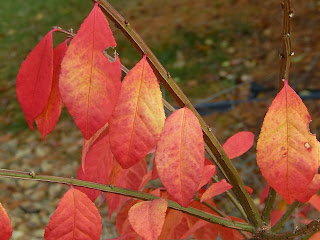 Last weekend I went to a quilt retreat. I'm always tired when I come home from those things, but it's a happy tired. I had a good time, as always.

I came home Sunday afternoon, and that evening Husband got a call from his parents. His father wasn't feeling good, and they wondered if he could drive father to the Emergency Room. Off he went, and he was gone a long time. When he had gone to pick up his father, the sight was difficult to see.. his father was bent over double in severe pain and moaning. Mind you, his father is 93 years old, so anything that appears to be severe is a little unnerving.

Husband spent all day Monday at the hospital, and we didn't know much until late in the day. They finally decided they had to do surgery to remove father's gall bladder and decided to do it then and there, on Monday night. I joined the entourage at the hospital and kept watch during surgery. Father-in-Law had been a tad nervous about the risks. The docs had to be honest and tell him that the risks were higher for him because of his age and because of his heart condition. He didn't like hearing it, but they had to be forthright.

Luckily, he came through surgery fine. He stayed in the hospital several days, so there were a lot of messages flying around, and people going to visit as they could. When one is 93, a longer hospital stay is in order after surgery. My brother-in-law, in comparison, had his gall bladder removed and went home the same day (he was in his 40s at the time).

All this meant long nights and short sleeps. In addition, this week I had three evening meetings and two day-time commitments (not even counting work). Husband was also coming and going from his work to do hospital duty for his father and chauffeur duty for his mother. It has been a whirlwind, and came on top of already being tired from my quilty weekend.

Father-in-Law went home today; all the excitement has a happy ending. Hooray! On Saturday I intend to sleep in and then to take it easy and do a lot of nothing.
-----

P.S... I added a "follow this blog by e-mail" button in my side-bar. Someone once asked me for it, and I wasn't sure how to do it. I think this should work. My list of followers had turned blank, for some reason, so I took it as a sign to give the e-mail option a try. If you sign up, you'll get an e-mail informing you when I add a new post to this blog.
Posted by Carol E. at 9:04 PM