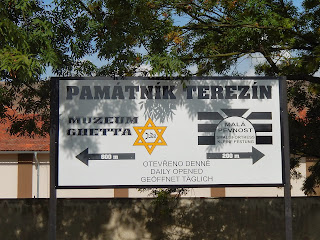 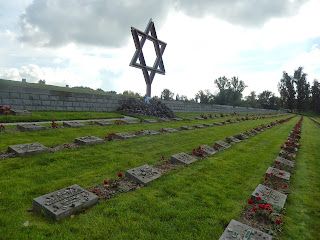 Last month I was lucky to have the opportunity to visit Terezin, a former concentration camp in Czech Republic. On one side of town is the fortress where they kept adult prisoners. In the town itself, every resident was evacuated, and the town was taken over by Nazis. Children lived in a barracks/prison in the town, while the regular housing was used by Nazis.

There were no amenities for the children, of course, but adults arranged secret schooling for them. There they concentrated many lessons on art work: drawing, painting, making of collages, and writing poems and stories. Thousands of these pieces of art were found in a suitcase stuck on a shelf, years after the war, and are now housed in a museum in Prague. This book is a small collection of some of those art pieces.

Terezin (German name: Theresienstadt) is known as the town that was dressed up, fancified for the visit from a commission from the International Red Cross. Some of the children write of the phenomenon of suddenly seeing gardens, pretty signs, and fake coffee houses and shops. The Red Cross group either fell for it, or reported positively because they believed they could do nothing about it. To this day it is still unknown which is true.

The poems are amazing and moving. I was especially touched after having seen the adult fortress and the current (now peaceful and pretty) town of Terezin. To have walked in the shadows of those lost souls is an amazing experience. Over 15,000 children under the age of 15 passed through Terezin. Only 100 survived.

This book honors the lives of the children who passed through Terezin and were given the chance to learn and create, temporarily giving them a glimmer of hope and expression. A lovely, touching book.
Posted by Carol E. at 8:00 AM