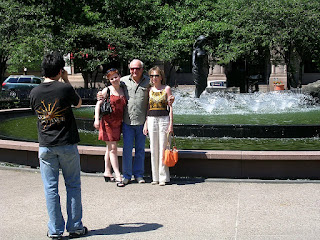 photo trivia: these tourists are being photographed
in which St. Paul city park?

The following questions are from Ken Jennings's Trivia Almanac: 8,888 Questions in 365 Days.

1) What two acting legends, Pasadena Playhouse friends and New York roommates back in the day, never worked on screen together until 2002's Runaway Jury?

2) What comedian, Christopher Reeve's Juilliard roommate, was, Reeve said, the first person to make him laugh following his 1995 accident?

3) The Egyptian plover is a bird best known for its symbiotic relationship with what host animal?
4) The host country's flag typically arrives last in the Parade of Nations that opens each Olympic Games. What was the only Games where this didn't happen?
Posted by Carol E. at 6:20 AM

The picture was taken...I am sure... haha...in Rice Park?? Or maybe Como??? I need to become more aware of Landmarks!

I think that's Rice Park and I'm pretty sure the host country's flag didn't appear last in the Athens Olympics because Greece's flag is always first.

The others, I have no clue. I know who Christopher Reeve's roommate was, but cannot remember for the life of me.

The tourist photo - looks like it's in Rice Park just outside of the Landmark Center. :)