Yesterday a few members from my guild came to my church to spend the day sewing. We had a good time. They really liked the space. It has great lighting, and it was such a beautiful day. With the windows open we almost felt like we were outside.

We got a lot done, talked a lot, and ate a lot. At the end of the night, as the last two of us were cleaning up, a storm had boiled up and sounded kind of scary outside. Suddenly we lost power, and one of our doors slammed shut. Creepy! It was weird trying to finish cleaning and putting things away in the dark. We made it out alive (haha), and I got home, only a mile away, and found that we still had power at home. Hooray!

Here's what I got done yesterday: 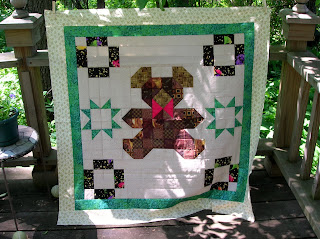 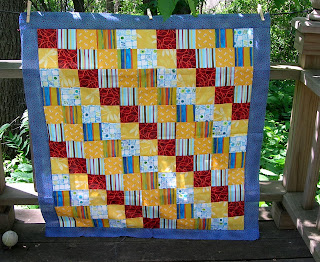 added the border - this is a very old UFO, made from blocks from an exchange in 2000! The middle appliqued block was taught in a class at my guild. Mine is a real mess. I was not a good applique student. I want to use it, however, so I'm keeping it. I plan to add more border(s) because I want this to be a bigger quilt (I'm tall). 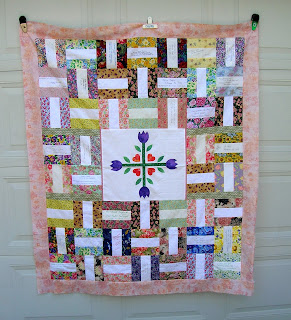 added the borders. Do you notice my mistake? This quilt is for my daughter, so I'll let her decide if I should fix the goof or just keep it as is. 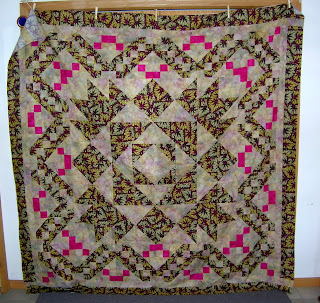 p.s. the mistake is in how I did the borders

made these two blocks for the lotto at: http://groups.yahoo.com/group/quiltblocklotto/
It was hard to do these without my stash at my fingertips. I probably would have used other colors if I had thought ahead, but these turned out OK, considering my limited options.

bound this quilt - it is made from Lotto blocks I won! It is going to Rosebud in August. (machine quilting by Janet) 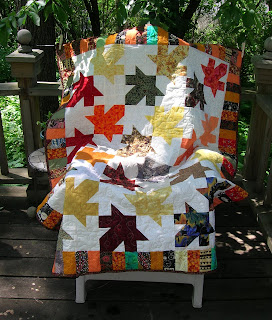 bound this quilt. This one is also headed to Rosebud in August. (machine quilting by Janet) 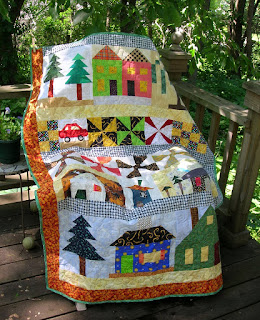 wow! Talk about productive! Borders are a spot many of my projects seem to come to a halt at, maybe a quilting day given to borders would help...

Oh Oh how many quilts..........fantastic your sewing day.
ciao ciao

Sounds like you guys had a great time! I don't see your goof - any hints?

You accomplished a lot in one day! I love the last one pictured.

You accomplished a LOT!

Nope, I did NOT notice the mistake until I found the clue. I'll bet no one will ever notice - after all , it's going to be rumpled and snuggled all up around a body.

Wow you haven't sit still. It is all beautifull.

An absolute feast for the eye today carol, Thank you! tracey