Update on Inside Outside Upside-Down

This post is in response to comments I received on my Wed., January 7 post and my Inside Outside Upside-Down challenge quilt.

Thank you for the comments, Readers. This challenge is not one in which someone wins. Instead, the quilts are gathered up in a group and are displayed at various venues around the state for the next year. When the next challenge is done, it replaces the traveling display. This means that a bunch of people will see my quilt alongside the fabulous ones done by the true artists in my guild. (There is some REAL talent there. Wow.) And soon I'll get back my challenge quilt from last year. It has been traveling around for the last year.

Last year I made that challenge quilt about four times before I had one that I felt was presentable. This year I didn't want to do that. But I might make a second attempt...

I really appreciate your encouragements for me to show it and participate. I might. I'm still contemplating.

One person mentioned that she liked the "skirt." Thought I'd show you what I really had in mind. It's supposed to be a window. That's our view of a window from the inside, looking at a curtain. Then under the curtain you see there is a kid outside, looking in with his hands up beside his face to see better. Really, that's kind of what I had envisioned... just making a window quilt... and I might still do that. And I'll make it more clear that it's a window and not a skirt. 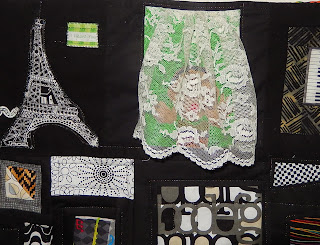 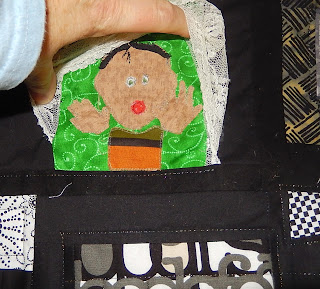 I also like this upside down part: Down Under aka Australia. 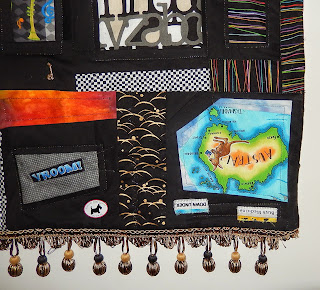 The challenge isn't due for a while, so I have time to think on this and perhaps make another one.

I loved that face peeking out the window. Here's my what if...
what if you cut the curtain up the middle and tied it back on both sides.
Then if wouldn't look like a skirt so much.
I love the upside down Australia. Somewhere I saw a whole map done of the world upside down. Maybe it was on a tea towel from Australia, don't remember.