SF CA and the County Fair

I've been away for a week. I went to a conference in San Francisco. I had a blast! The workshops were good, and my friend and I also took time to do some touristy stuff. Time in San Fran goes really fast, because there is sooooo much to do and see! I'm so lucky I had this opportunity to go.. a few years ago I drove through San Francisco on the way to somewhere else, and I really liked the city and wanted to get another chance to stay and visit. Now I've had that chance!

I came back last night and stayed up way too late trying to organize my SF photos. They still are a work in progress, but I can share a couple of shots. 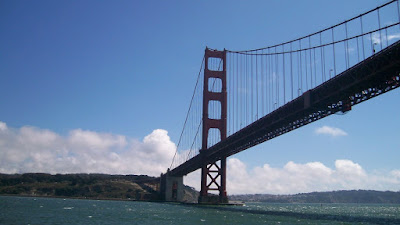 We took a short cruise through the bay and under the Golden Gate Bridge. We also cruised pretty close to Alcatraz, but didn't go in. It was very interesting to see it up close! The next photo is Lombard Street, the crookedest street in the world. It's also a very beautiful one! 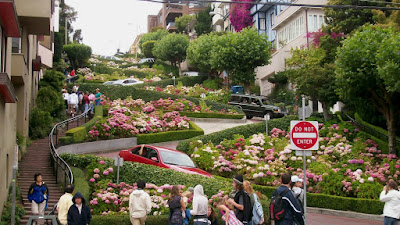 Today I visited our local county fair so I could check on how my quilts did in the competition. I entered four quilts and won four ribbons: two firsts, a second, and a third! Isn't that nice? I never enter quilts in other judged arenas, but I find it fun to put them in the county fair. Many of the quilts are from quilters I know who are members of my local guild. I guess that's what gave me the confidence to join in the fun.

You can see that space is at a premium, so we don't get to look at entire quilts. They have to be exhibited folded up, but that's OK.. they make such a pretty picture, don't they? 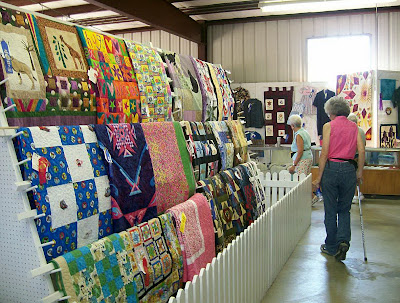 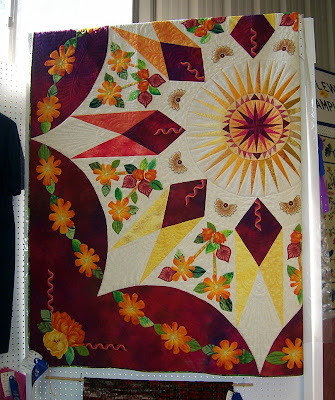 This next photo is my table runner - it won first place in its division! 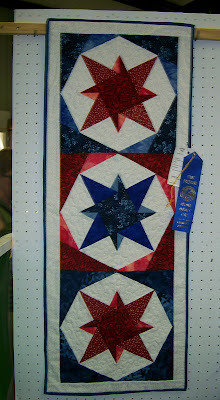 The line up of quilts at the fair is just beautiful. Thanks for sharing!
And congrats on winning 4 ribbons. How exciting! You are going to frame them, aren't you? or is that frowned upon?

Glad you are home again, safe and sound! The pics from SF look wonderful, I look forward to seeing more.
Love the quilt pictures! Congratulations on your victories...great job! Hugs, Finn

K.Gems, I don't know if it is frowned upon. I also don't know what I will do with my ribbons. I have a couple of them from last year, too. For now they just hang on the corner of my bulletin board.

Just catching up with my reading. Congratulations on your fair ribbons - well done!

Congratulations on the ribbons! I never enter quilt shows, not even county fairs - not sure why - but probably because I don't work on many projects for myself.

I love SF. It's one of my favorites cities to visit. Keith and I did the Alcatraz tour the last time we were there and it was great - very interesting.