Last week I attended our annual cousins gathering where we include a book discussion. This year's book was The Presdident's Club, Inside the World's Most Exclusive Fraternity by Nancy Gibbs and Michael Duffy. It's a long book (500 pages) which I would never have picked up to read on my own. I wasn't done reading it when I left town to attend the reunion, but I read like a demon for the next day and a half, and I finished it just in time.

This book was very interesting -- better than I expected! The information was fascinating. It has to do with the presidents of the U.S. who have returned to private citizenship. They get together and discuss lots of things, including former and current politics, and they act as advisors to whomever is the sitting president. They are the only other people in the world who have done the president's job and who understand its unique pressures and difficult decisions that are required. So they can be very valuable resources to the sitting president.

What was amazing was all the finagling and even competition that goes on between the presidents. Some of them hate each other during campaigns but then become great friends when they both become former presidents (or the opposite can also be true). Some of them have a hard time giving up the power and they keep their fingers in the pot, trying to stir things up and affect policy decisions (um.. just take a guess... Nixon?). Some of them surprise me with great upstanding qualities I was unaware of, and others disappoint me and fall down a notch or two on my list of presidents I admire.

The book starts with Truman and his reliance on his predecessor, Hoover (immediate predecessor FDR having died). It ends with Obama. It is VERY well researched and full of factual and fascinating "drama." I'm glad we chose this book, which I never would have read without the cousins' reunion requiring it. 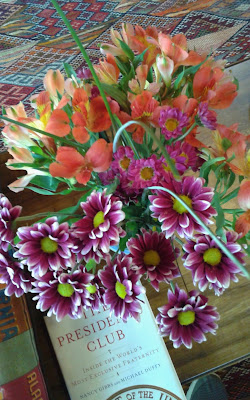 Book discussion day was also my birthday. My sister gave me these beautiful flowers.

Oohh I'm going to look this one up!!