My new guild, Minnesota Contemporary Quilters, had a challenge: make a quilt representing the word Cycle. Anything goes: bicycle, cycles of life, recycle, anything. You get the idea. I decided to use the Water to Earth cycle.. in my mind it turned out great!

In real life, not so much. I made this thing THREE times. The first one.. forget it. The second one is what I ended up keeping. The third one had some elements that I liked better than on the second, but not enough of them to warrant keeping it. I much preferred my clouds and lightning in the second one (the keeper), but I preferred my lake/water/ocean in the third one. Wish I could pick and choose from the three attempts, but I already had the keeper one quilted. Well, live and learn, as they say.

I'm learning, still... I'm sure I'll feel humbled by the beauties created by the other guild members. There is a lot of talent there. (I have already seen several other Cycle quilts and am awed by the creativity and the workmanship.) But, I'm glad I'm there and can learn and absorb from them.

Without further ado, the Water Cycle: 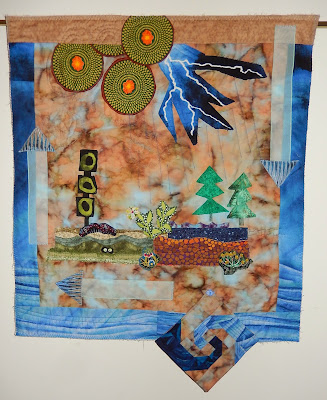 The next two show the rain and the water on earth: 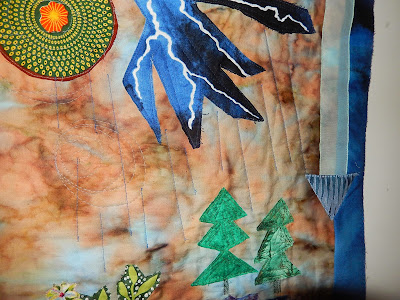 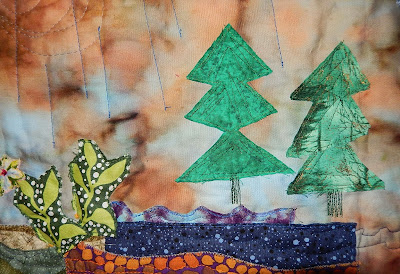 I wanted to include at least one traditional block. I attached it with that little fishy button. (It's a fishy with a nose.) 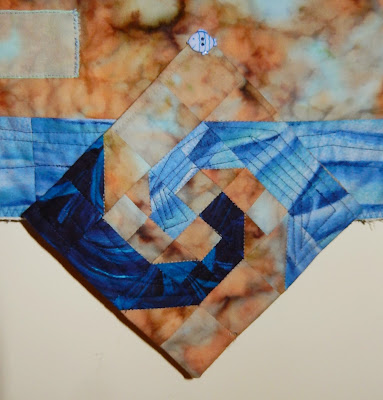 I don't know if I should turn it in. It will be on display at the Minnesota Quilters show in June, which is a BIG SHOW. Will I survive the public showing alongside the beauties I've already seen?? Eeek. Kinda scares me to think of it.

Edit: It is now the next morning. I tossed around in bed last night, thinking about this quilt. I decided NOT to turn it in. I am just not happy with it. I still have a couple weeks. I could make another one if I get inspired. After deciding that, I slept like a baby. I think it is the right decision.
Posted by Carol E. at 11:24 PM

Of course you should turn it in. We are our own worst critics. It is important to have a good variety of interpretations of the the theme.

Absolutely you should turn it in! If only the quilters who loved their finished product decided to participate, there wouldn't be many quilts to see!
My quilts never turn out as I had imagined, but eventually I come to appreciate them :)
I love your theme and ideas... very original!
The snail's trail block at the bottom is the perfect touch!

Yes, turn it in - it's joyful, interesting, responds to the challenge and any fish with a nose HAS to be a winner, whether it receives a ribbon or not.

Additionally, it adds to the mix encourages others to try new things, etc. I think it's pretty cool! I was chairperson for our Guild "Ardis Wannabes" and we all learned very quickly that the art is in the trying and finishing, not necessarily in the project itself! Just having a finished project is winning!!!

I'm in the turn it in camp too.

Just remember that no one else has seen the idea in your head that you are comparing it to! So we don't compare, we just appreciate what we see.

Not sure why I am just seeing this post, but this quilt is just brilliant! Water Cycle. Wonderful. So many lovely elements. Of course you should turn it in. It will certainly stand up to State Show quality!!!! Just do it, Carol!