Purple Hibiscus by Chimamanda Ngozi Adichie
Excellent book! This takes place in Nigeria. Political upheaval is happening, and during this time the story focuses on an extended family which is also experiencing upheaval and trauma. Excellent character development, exquisite writing. Several years ago I also read and loved Half of a Yellow Sun by the same author. She's a great writer! 5 stars

I liked the book in the beginning. There were two story lines running side-by-side. One was about an ICU doctor and her un-named patient, Jane Doe, who came in after a hit-and-run accident, critically injured. Another was the friendship between two young people (pre-teens). One was a full-time resident of the area and the other was a summer-only resident. They have an interesting and sometimes odd friendship.

The two stories eventually merge, and as the characters all turn into adults, I began to like the story less. The characters as adult weren't as interesting, and some of the circumstances were ... odd. There is medical and scientific detail that is interesting and was well researched. I just didn't think the characters were as well developed.

In the end, I wasn't as interested as I had hoped. I wonder if my sister really thought this was an excellent book, or was the familiar setting what prompted her to recommend it? I can give it no more than three stars out of five. 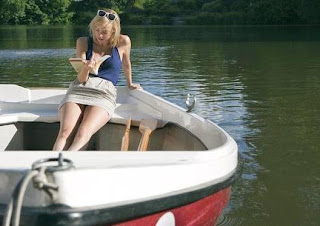 I reviewed the audio version of Adichie's novel Americanah for Library Journal last month. It knocked my socks off, it was that good.