Educated by Tara Westover
I had heard so much about this book, I was afraid all the hype would affect my enjoyment of it. However, it wasn't long before I was hooked in and could hardly put it down. I read it all day on New Year's Eve and finished it at 3:00 AM on New Year's Day.

The author grew up in a survivalist, Mormon, very strict and conservative family in the mountains of Idaho. They did not believe in participating in any government or public services, and avoided the Medical Establishment at all costs. Consequently none of their seven children ever attended any school. Unbelievable were the ramifications of never allowing medical intervention even in the face of serious accidents and illnesses. At times the details were hard to read!

She eventually does go to college and has some seriously eye-opening experiences due to her complete ignorance of many commonly understood historical and cultural events. She struggles to establish herself as a separate person, on her own and unencumbered by strict family teachings. As she learns to think for herself, her turmoil grows more over-powering. Adjusting to what most of us would call the "real world" was incredibly difficult. This struggle between her own yearnings and the psychological/spiritual/moral background she grew up with was captivating. It brought to mind some of my own thoughts on family, culture, and independent thinking (though to a much smaller degree than she dealt with). It can take a lifetime to sort out how much is one's own choices and how much is family indoctrination, good or bad as it may be. 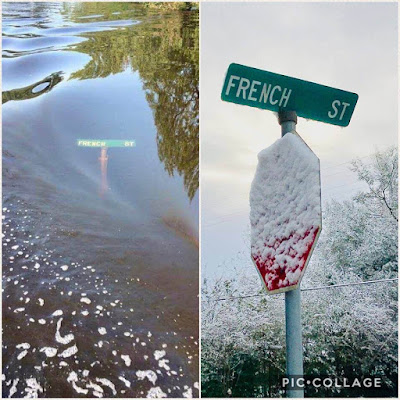 Yep those pictures were taken in Beaumont. One in Harvey, one a few months later that winter.

Danny Scott said...
This comment has been removed by a blog administrator.
2:13 PM

Tammy, I had forgotten! I knew that when I originally saw those photos I had read an explanation, but in the meantime I forgot. Thanks for the reminder. Tough year, that.