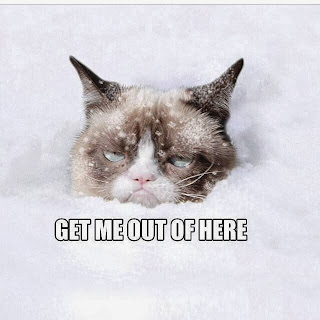 Just let me complain for a bit, OK? It snowed today. It was really quite pretty! But, it snowed heavily right after Husband had gone into town on the bus, so he'd not had opportunity to shovel.

I had to leave the house later in the day. I chose not to attempt to shovel. I hate shoveling, anyway, and the snow was still coming down.

Finished my work and chores, started on my way home, and while sitting at a red light, someone rear-ended me... TWICE! Not sure how that happened. Miraculously, my car had very little damage, while his sustained most of the owies, so I said "forget it" and we went on our merry ways.

I arrived home to find six inches of snow in our driveway, and a MOUNTAIN of snowplow crap at the end of our driveway. We'd not been home or had time to shovel, so our mailbox was also still snowed in, and the letter carrier did not even stop at our mailbox. No mail delivery for us naughty not-yet-shoveled-out people.

I had to park in the street; first I galumphed through almost knee-deep snowplow crap to get into my driveway, then into the house. Why does all the snowplow residue get piled so high in our driveway?? Neighbors never get anywhere near the same amount in theirs! It really irks me. We're the Shovel Family, and they all have snow-blowers! Very annoying. I sat and stewed for a while, and decided I couldn't really leave ALL that shoveling for Husband when he would come home after dark.

So I ventured outside again and did some shoveling. Had an aerobic work-out and my back sort of hurt, so I quit. I had made a dent; at least Husband wouldn't have to do every inch of the driveway.

Husband came home after dark. He was cheerful! Maybe because he takes the city bus and didn't just drive through icky streets and get rear-ended out of the blue.

He went out and finished enough shoveling to at least get my car back in the garage, and hopefully tomorrow we'll get mail delivered.

I'm sick of winter. And feeling too old to pick up another shovel EVER.

Rant completed. Thank you for listening.
Posted by Carol E. at 11:05 PM

I get the rant...but you can be happy for me...we had a snow day!
I shoveled for a bit too, until my face was cold and I feared ending up with a back ache. I could get in and out. Hubby came home and cleared everything with the tractor.

I love the kitty photo and think my squirrels might be saying the same thing. After 2 mild winters it is kind of hard to face this year's snowfall. Last year at this time we had 3" by now, this year almost 50". If it wasn't so darn cold I wouldn't mind the shoveling (a little of it anyway).

Extended snow does that to a person