I was trying to come up with something to say about the horrific events going on in the USA. I couldn't write anything better than my nephew did. This was his recent entry at Facebook, and he gave me his permission to share it with you here. Wisdom from my nephew, Adrian Cowles:

Reflecting today on the tragedies in Baton Rouge, Falcon Heights, and now Dallas, I'm thinking about dehumanization. These people died not because of who they were or what they did, but because of the color of their skin or the color of their uniform. In the wake of such events, the fact that we often view others monolithically is brought into focus. We think we know people because of one characteristic. We think we know them because they're black; they're white; they're a cop; they're a parolee; they're a Christian; they're a Muslim; they're a Democrat; they're a Republican; they're straight and cisgendered; they're a member of the Queer community; the list goes on. We have become enemies. Members of the police and the black community view each other as enemies. Democrats and Republicans are enemies. I don't see how anything can change without a shift in these paradigms.

I'm sure we've all seen a lot of things we disagree with on social media these past few days. Things that may make us want to scream, unfollow, or unfriend. Sometimes this may be necessary, but I wish that more often we'd try to talk to and understand each other instead of cutting ties. How else can any of us grow and learn? Part of that goes back to my problem with social media. I think it's far from the ideal venue for such conversations. But these are important conversations and they must be had. That's easier said than done, and if you're at all conflict averse like me, it can be a daunting prospect, but having that dialogue is essential. Many exhortations have been made that we must not remain silent. However, speaking up doesn't do any good if it's only with people who agree with us.

If historical precedence tells us anything, neither officer who shot and killed Alton Sterling and Philando Castile will be punished at all. This is a pattern we've seen over and over and it's a systemic problem. That is why black lives matter exists. Because time and time again when the final verdict is read (if it even gets that far), the message that the black community receives is "your lives don't matter."

I have to believe that listening to each other and behaving compassionately can begin to change things. You can call me idealistic. Or worse names if you so choose. But I know hatred and violence only begets more hatred and violence, and I for one want to try to go another way, individually and societally. 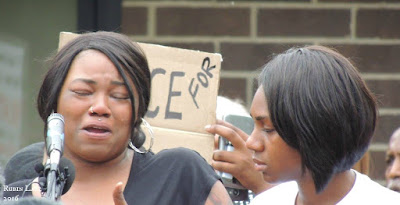 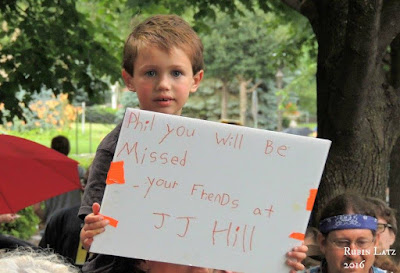 pictures from a rally in Minnesota ... the young man who was killed in a suburb of St. Paul was an employee of St. Paul Schools and well liked by the children at his school. The other photo is his sister. Photos by Rubin Latz.

Thank you Adrian for your post, it covered so many of the problems that we are dealing with, (or not), very well said.