Yesterday (Aug 24) was our 40th anniversary. I can't imagine where all the time went. It sneaks up on a person in such a hurry. 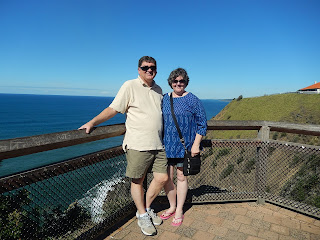 at the eastern-most point in Australia, at Byron Bay

As you know, we went to Australia in May, which was our early anniversary celebration. This weekend, when it really was our anniversary, we were going to go out of town to celebrate, but at the last minute we decided we'd rather stay home. We had a secret Stay-cation, not telling many people that we had stayed in town. Every day we decided to do a little thing to commemorate the anniversary.

Friday night we went out for dinner with my cousin and her husband. They bought us cupcakes afterwards for our anniversary (no photo). Saturday we went to Stone Cold Creamery after dinner for an ice cream treat (no photo). Sunday we went to a bookstore which recently moved into downtown Saint Paul, and then took a short walk around downtown. 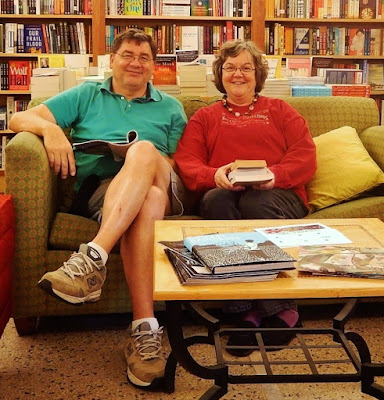 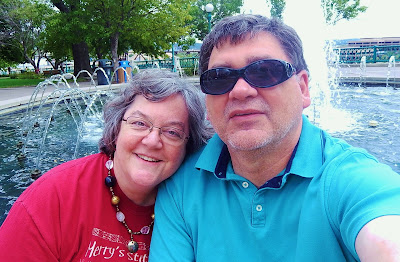 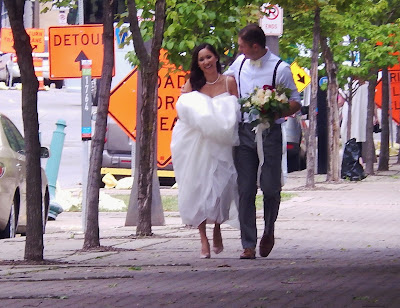 We saw this newly-married couple. I hope they are lucky enough to have a happy marriage and some day celebrate their 40th anniversary, too. Strange thought to think that we probably won't be around to help them celebrate.

On Monday we delivered some food to the local food shelf. I wore a home-made veil. Haha! Fun and crazy idea.. I didn't even wear a veil on the original wedding day! We had a modified-hippie wedding in 1975. I wore flowers in my hair, but no veil. 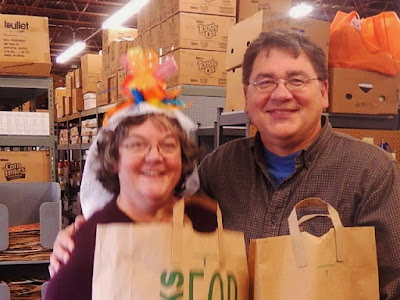 I am a lucky woman to have such a nice husband and good marriage! Here's to 40 more (or as many as we can eke out).

Congratulations!
Lovely to celebrate and you did some very special things to mark the occasion.
We just came back from Duluth, Minnesota where we celebrated our 55th anniversary with a full moon over Lake Superior.
Betty

Congratulations!!! This wasour 40th year, too. Seems like just last week we were that young couple ...