I can't believe it has been five days since I blogged. I guess I've been keeping myself busy! But looking back, I can't think of much that I've done.

I started doing some substitute work. It's fun! I come and go and accept or turn down jobs as I want to. It's like a dream job. I used to day dream about working hours like this, and now I'm living it. Wheee! Love it so far. I get to see students, some of my former co-workers, meet new ones... it's super duper.

The other day I putzed around at home, then decided to go out to a movie. I saw "Hereafter." It was interesting and OK, but not great.... however, Matt Damon is in it, and that makes it almost great, in my book. He is one of my faves. At first I thought I'd be getting a private showing of the movie, but then five other people joined me. Six people in a whole theater! Funny.

After the movie I went to a nearby restaurant. A few people wandered in for some take-out, and then there was me seated and eating in the dining room. The only customer! It was 3 p.m., so most people weren't eating at that weird time. I was having a late lunch. Sometimes my eating schedule gets very thrown off now that I'm retired.

I stayed and read for a while in the restaurant, then I left and was driving home in a lazy manner when my phone rang. It's lucky it did, because the call was about a meeting I was supposed to go to in a half hour. I had completely forgotten about it! I made it in plenty of time. No one knew I had almost blown it off! 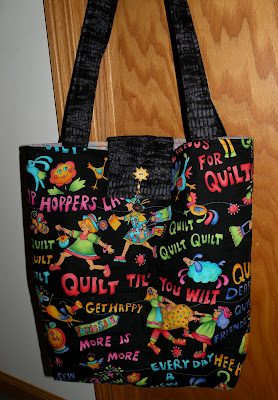 As for sewing, I have been in a slump lately and not too interested. I did manage to make this bag. It's quilted and lined and has a pocket inside and the flap attaches with velcro. I plan to put it in the small quilt auction at my guild's show in February.

And that is the sum total of this retiree's ramblings. Can you handle the excitement??
Posted by Carol E. at 12:56 AM

hmmmm... almost blew off a very very important meeting! Boy am I glad I couldn't remember what time it was...great minds work together! Too funny!

Ahhh, I'm dreaming of those days... Until then, I go to work every day, I sew when I can and sneak knitting in my 'every day' bag just in case! :-)

Sounds like a good week, no pressure to work more than you want, lots of free time to play, read, eat and putz around, and a bit of sewing. Can't beat that in my book :) I love the bag!

Your bag is fabulous- I am sure it will be a hit in the guild event- the fabric is such a terrific choice for any quilter.
Sounds like you are doing the things you need to take care of yourself- By taking care of yourself you are feeding your spirit- Your creative desires will return when you are ready.
Thanks for sharing your lovely retirement times,
Anna

Ah, yes days of leisure...I'm loving mine. Love the bag! I like inside pockets. I usually make a few as I have keys, lipstick, pens etc and like to have them secure.
I like the longer handle too!