My cousin recently contacted me and asked if I would like to have an old quilt made by our great-grandma. No one in her immediate family wanted it. Of course I said YES! She mailed it to me from Washington, and here it is: 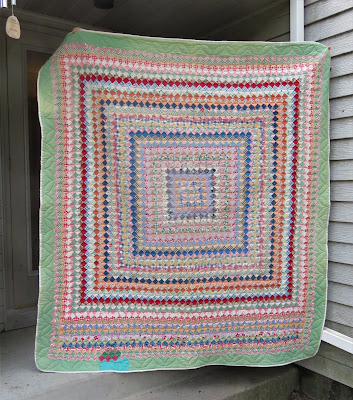 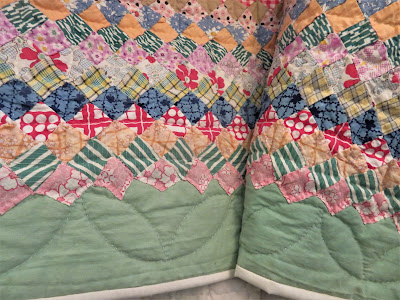 My great-grandmother, Emma Pratt Shaw, made this in the late 1930s and gave it as a top only to my Uncle Roger H. Roger was too young to appreciate it. Later, in the 40s, he had his sister, my Aunt Hope, finish it. She repaired some of the squares and sandwiched and hand quilted it. Then it was kept in a closet and basically unused until now. So it is in GREAT shape.

This quilt is very similar to a quilt that was given to my dad.. same story. Made in the 30s, finished in the 40s, and it was in our family and used often as I was growing up. My sister now owns that quilt; it is much loved, very soft and tattered. I am thrilled to have its pristine sister that even has some of the same fabrics in it.

What a treasure indeed --- enjoy it!!

I can't wait for cold weather so I can use it.

Exciting history and pretty too!

That's really cool! That design is making a comeback, too, with the four patches on point in rings. I don't know what the name is, but I like it very much :)

How exciting, a Trip Around the World and a Twin to your dad's quilt. Quite a treasure.