Random Observations Down Under

Any time a person travels, that person will no doubt observe some funny random moments -- unusual habits, interesting or bewildering slang, customs that are done a little differently from home. I collected a list of things while traveling in Australia and New Zealand. These are my random observations.

Some of the slang I already knew. I started writing them down as soon as I heard them. For example, right away, when going through customs in the Sydney airport, a customs worker said "ta" when I put my luggage in the right place.

A hotel worker said "g'day" to me.

I heard a guy on the phone saying to his friend, "see ya, mate." Eventually I heard "mate" many times here and there.

Learned these new words. I hope they are not offensive:
wogs = Italians
poms = Brits

A guy at Hubby's trade show said, "Let me just check this over and make sure it's all tickety-boom."

A guy will be called "Mack" if his name isn't known.

In a previous post I already told the story of "return trip" meaning the same as what I call "round trip." After I returned home I heard this on a radio news story.. a person from Sydney had flown to Ireland at the time of the same-sex-marriage vote, and had paid so-many dollars for a "return trip." For an instant I was confused again.. thinking that was for the trip BACK to Sydney only. Then I remembered that it meant "round trip." A lesson I learned that helped me back home! Cool.

Salt and pepper shakers--
Here in USA we put salt in the shaker that has bigger and/or more holes. We put pepper in the shaker with small and/or fewer holes. In both Australia and New Zealand it is the other way around. I learned this by attempting to put "salt" on my eggs. It was awfully dark salt! So from then on, I tested every shaker on a napkin before using it on my food.

Restaurants, including fast-food --
All of them were "leave your dishes on the table" style. I never saw a place for customers to return their own dishes to a platform and scrape your own plate (though I kept looking). They tended to be not very generous with napkins (serviettes?) or with ketchup (tomato sauce, pronounced "to-mah-to.") You'd get one tiny squeeze packet or part of a tiny cup with a bit of ketchup in it. They must not consume ketchup by the bucketful like some Americans do. I personally don't, so I was fine.. just noticed that it wasn't even available sometimes, even with "chips" (fries).

All I had to do was open my mouth and utter one word, and the question would be "which part of North America are you from?" It felt funny being the person with an accent (but hey, it was my turn to experience this).

I tried to get photos of the different signage I saw. The first one, below, is a striped cross-walk, and it's pronounced "zeh-bra." The second one is just a really cool place name. 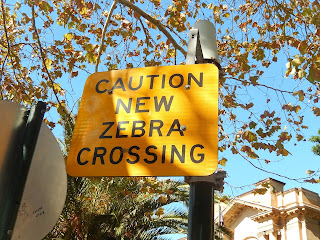 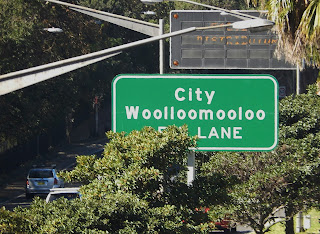 This must be where a person goes to find some really handsome "mates." 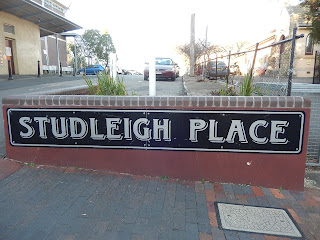 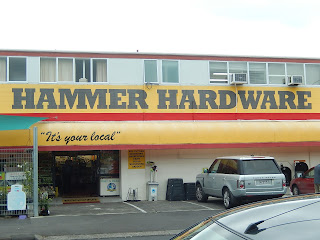 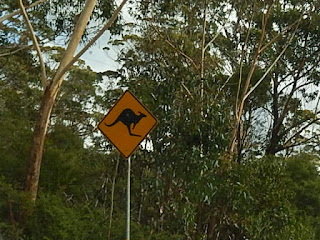 above: hardware store says "It's your local." Then there is a kangaroo-crossing sign. I saw two koala-crossing signs, too, but they came up too quickly; I couldn't grab a photo. I hate to think of cute little koalas trying to cross a highway. That's how they end up in the Koala Hospital. 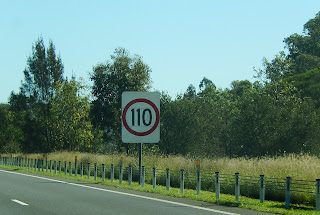 Well, as you see, none of this is very profound.. just the interesting or odd things one runs across on a daily basis when traveling.

P.S. I never did see the swagman in the billabong.

Labels: Down Under, travel

I have really enjoyed all of your posts about your trip.

I have never been to Australia, but I did learn a phrase many, many years ago from a nun who was visiting MN from Australia. She told someone she was 'bushed' and they offered a seat to rest because here 'bushed' means exhausted. In Australia, 'bushed' means lost and she was asking for directions.