Look at this! http://www.onemilliongiraffes.com/ This person is trying to collect photos of one million home-made giraffes! Isn't that cool?? You can help if you want to. Here's a tutorial you can try. He needs them by the end of 2010. I sent in a picture of my giraffe in a quilt. I don't know if it technically follows his rules, so I'll see if it gets posted. Meanwhile, I'm going to try to draw one, too! Or make one out of something I find around the house. 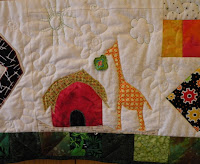 Also I have more blocks to show you. These are for Kandee. And I'll confess that these blocks are not pouring in as fast as I thought they would. If you want to make more, please go ahead. Maybe some people who would normally do these are on vacation. I think I'll make some more, too. Anyway, all the blocks I have received are so pretty! I'm sure Kandee will love this quilt. 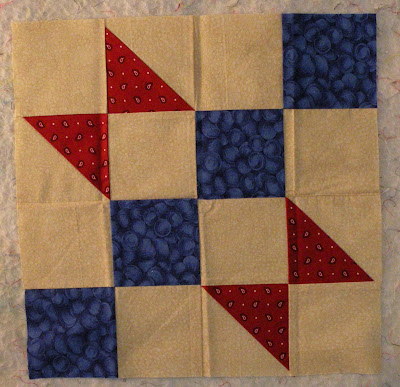 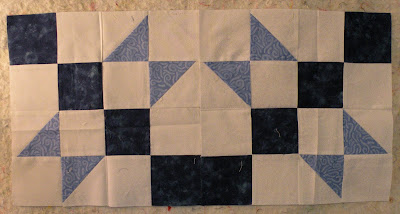 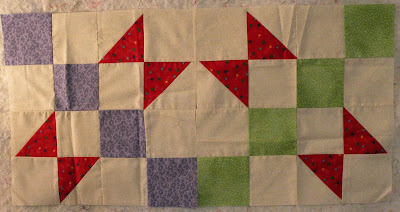 These next two blocks are only one year late! Not bad, eh?? They are for our local quilt guild past president. I was supposed to have these made and delivered to her in July 2009. Luckily she has not started her quilt, so she is being patient about waiting for mine. Because of that, I made her two instead of just one. (In the meantime, one more president has come and gone, and I have not yet made her block, either. Where does the time go??) 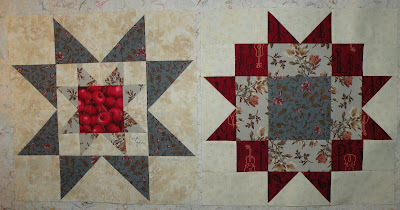 Now I'm going to go create another giraffe.
Posted by Carol E. at 1:02 AM

That is a cool giraffe project! It makes me think of the one my older DD made in school in about the 2nd grade out of paper mache. I think the tail fell off after a while but she probably still has it in her box of treasures :)

I made one block for Kandee but will put together another one quickly before I mail them to you.

The giraffe project is pretty neat. I do love to see your sewing - it inspires me to make time to sit and sew. I have several projects in process. My wonderful family gave me a nifty new fancy machine with a bazillion preprogrammed stitches for my birthday. I'm still reading the thick manual, though, and using my old faithful Brother in the meantime!