The other day I impulsively suggested on someone's blog that we all make tote bags and compare photos. "Well," I thought, "since I opened my big mouth, I should probably make a tote bag." So I sat down with purple scraps and started to make scrap blocks that could go together to become a nice, purple tote bag. Something happened, though. I noticed that one of my scrap combinations looked like a letter "C." Then I remembered that I alrealdy had a letter "A" that was a reject from a previous project. That's almost half my name, so I went ahead and finished my name. I still thought it could become part of my tote bag design. But then I made my husband's name... and now I have a whole new idea as to how to use these letters. For all I know, the project will take another 180 degree turn at some point. They say that's how a lot of writers write a novel... it writes itself as they go along. We'll have to wait and see how this quilt designs itself. One thing I'm pretty sure of: it is no longer a tote bag. 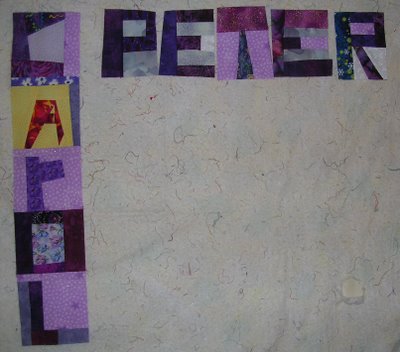 Cool! You never know where your creativity will lead!

Ooooh - you've obviously been bitten by the Tonya bug when you weren't looking and thought you were just bagmaking. Your letters look great and I love the purple shades

The letters look great! I love the progressive creativity that comes with our quilting hobby :-)

Hi Carol..your letters look just terrific!! Isn't it funny how you can set off with one thing in mind and then suddenly it's another whole project...? Amazes me every time! Hugs, Finn