I took on my sewing room this weekend. You would not believe what it looked like Before. It was so bad, that all the hours I spent on it have not yet gotten it to the After stage. My sewing room had gotten so unuseable that I was using my sewing machine in the dining room. I think I mentioned this before... hubby was afraid I was taking over the house. I have thrown away two trash cans full of stuff and have deposited three big bags of old papers in the recycling bin.

I can't believe how many patterns I had printed off the internet and "set aside." Doesn't that sound polite? It really means, "toss into the corner and let accumulate and gather dust for a couple of years." (Yes, I was finding papers from 2005 on the bottom of the pile. Might as well be honest.) In six lifetimes I would not have been able to use all those patterns - and some were duplicates of patterns I have already saved! 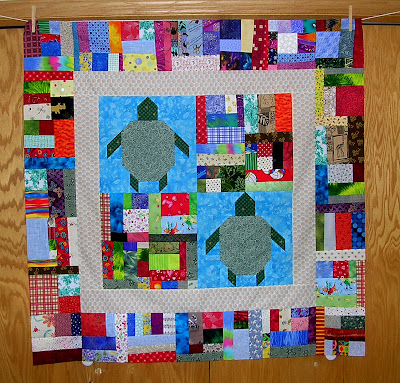 To reward myself for all the work, every few hours I would let myself do some sewing. I had to make a few extra crumb blocks, but did have most of these already made. The turtle blocks were made by Ann D. ("a long time ago" according to her - apparently my orphan blocks pile is similar vintage to my piles of tossed aside papers.) It didn't take long to put this top together, but it took long enough so that I felt like I got some "real" sewing time in. (None of this fake sewing time for me, thank you!)

It's embarassing to admit that I'm still not done cleaning my sewing room. I'll keep plugging away at it; I don't know if I'll get it to a point where I dare take a picture of it, but wouldn't that be grand??

Meanwhile, this top with the turtles will be on its way to Wrap a Smile, to wrap around some little kid who goes through cleft lip/palate surgery. I hope he or she loves it!
Posted by Carol E. at 8:38 PM

I know what you mean about downloading patterns and printing them out. I have been sorting and tossing also. Its amazing how we accumulate these patterns.

You should see my pile of printed patterns in my sewingroom LOL No way I'm going to make all these quilts. So next time I will look through them and throw half the pile away............I think LOL

Bet you're so glad you have the cleanup well underway. Show us a picture!

That's a great idea to clean and give yourself little rewards of sewing time, LOL!

Just think how wonderful it will be to have the room all finished!

Oh Carol I completely understand the downloading of duplicate patterns!!!

The turtle quilt is cute. What a good reward......

I adore this quilt! The crumbs are so vibrant and the turtles are a great focus point. It will be a blessing for the child who gets it.

What a fun and brightly colored quilt! It's perfect for a child.

I can sympathize with you on the cleaning of your sewing room. I am going through the same process. My quilting frame is in my guest bedroom right now because it doesn't fit anywhere else.

Right there with you as well, it's sad when you need to clean to walk in, and that's about my stage!! Tracey

Gee, Carol........you don't know how glad I was to read your post about cleaning the sewing room. Everything I read was about my sewing area! With good intentions, I started notebooks for all the patterns I printed, and there it sits (for years). I started cleaning my area days ago, stopped, and now I'm back at it...feeling like I haven't made a dent! Glad to see I'm not alone...lol Great quilt! I know whoever receives this quilt will certainly smile when they see the turtles. Too cute.

I like the turtles set with the crumb blocks.

My rooms could use some cleaning too but I hate to slow down when I'm on a roll.

Thanks for the comments on my quilting. At least I'm not alone with my dissatisfaction! I used to be a lot more tolerant and I'm not sure what changed. Maybe I just feel I've been doing it long enough that I should be better at it.

Hey, that sounds like MY sewing room! lol The lil' turtle quilt is very sweet. I'm sure it'll be much loved by the little one who receives it.

Thanks for visiting and commenting on my blog! I'm glad you figured out who I was. (grin) I did finally get it listed on my profile. Lots yet to learn, but I'm enjoying this SO much more than my old blog.

Take care now, and keep up the awesome work you do!

Good luck on the cleaning - at least you can pat yourself on the back when it's done.

Funny thing - about 2 months ago, I cleaned out my sewing closet and I have only opened it to LOOK at the neatness - the rest of my mess is now all over my sewing area - I can barely move, it's so full. Wha' happened? Hope your result works better for you! LOL

The turtle quilt is darling! Clever use of 2 blocks!

Love the crumby turtles Carol...LOL! A really fine job of combinding the leftovers...and a good reward for cleaning. I'm in the process of doing that also...sad to admit how long I've been at it, but the outcome THIS time will be REAL organization!! I've promised myself.
Keep up the great work...the cleaning and the sewing! Hugs, Finn