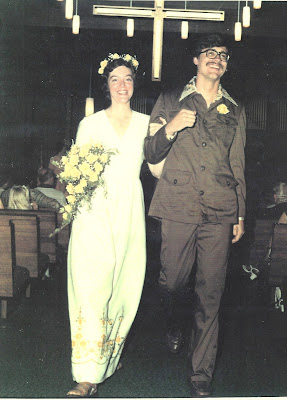 Today is our wedding anniversary! We were married 38 years ago today. It has been 38 years of FUN and happiness.

After our vacation was aborted due to high heat and humidity, we decided going to a movie would be a nice, cool thing to do. We saw "The Butler." It was good! After the movie, the entire audience in the theater must have been feeling moved... only one solitary person got up right away and left as the credits began to roll. I have never seen that happen before. Usually most people get up pretty quickly and leave; hubby and I tend to be the last folks, still sitting there and watching the credits to their bitter end. (Why? We just like to... it doesn't feel finished until we get to that very end.) Anyway, I took it as a sign that everyone had to sit and let it soak in for a few minutes before they could get themselves out of their seats to go back out into the world.

The movie made me feel incredibly sad about all the people in our world whose lives have been trampled, or they never had a chance, or their lives were snuffed out by violence or war. (No, it wasn't news to me; just a painful reminder.)

We liked the movie, but... (just a warning -- we'll probably be in the minority with this opinion) ... we wished it hadn't been so dramatically fictionalized to include every important, historical event that occurred during those years. According to what we have heard about the real-life butler, he was always very respectful and kind, making all the presidents love him and feel as Reagan said, "you feel like part of the family." We would have liked the movie to be more about that... the guy himself, the work he did, the interactions he had with the presidents and others in the White House.

It was very Forrest Gump-ish in the way it tried to include every meaningful historical event. We would have liked a more focused story about the Butler.

Oh, well... we still liked it and are glad we went.

So today is our anniversary, and we plan to go out for dinner. I have a coupon for Restaurant "B", so I guess we'll go there. Should be yummy. It always is.

Isn't 38 years of marriage amazing? I think so. I have been so lucky. My husband has been so patient and has put up with a lot! My advice for a happy marriage: find a patient partner who loves you despite your egregious faults. Like each other, and have a sense of humor. 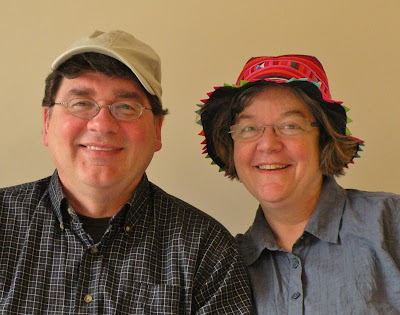 Happy anniversary! I like the embroidery on your wedding dress.

Happy-Happy day to you both.

Wishing you a fabulous wedding anniversary and many more happy years together.
Having fun and laughing together is one of the best parts of being married.
Good days and bad, I wouldn't trade my partner in life. It strikes me like your feel the same way.
With best wishes,
Regards,
Anna

Love the wedding photo. Is that a leisure suit? I remember making one. They were supposed to become the new formal wear, but then they disappeared...ah fickle fashion.

Thanks for your nice comments, everyone. My mother sewed my wedding dress out of Irish linen.. embroidery was already on it. And hubby sewed his own leisure suit!

Happy anniversary! It was fun to see your then-and-now pictures. I think your prescription for longevity is a good one.

Our 33rd was the 23rd. There's a "then" picture but the "now" (snapped at Rotary last week) didn't turn out well enough for publication.

My son just got married last week on August 24th. I hope he is as lucky in love as you are. It's amazing, you don't look any older.