Wow! This book grabbed my attention from sentence one! I could hardly put it down. Tense, moving, interesting, well-told. This book is an eye-opening look at immigration. I have heard there is some controversy since the author is not from Mexico (it's about a family from Mexico). But I don't hold that against her as it seems to be very well researched and so well told. A good author can write well about a place she is not from. Cummins does that beautifully. I highly recommend this fascinating book. 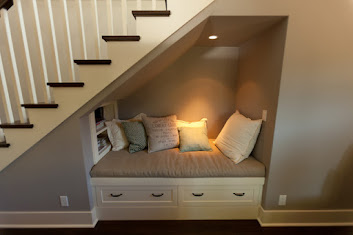 A World Erased by Noah Lederman

Lederman's grandparents were Holocaust survivors. As he grows up he begins to feel more and more curious about their stories. He especially admires his grandfather (Poppy) and wants to know Poppy's history, which included fighting with insurgents against the Nazis while in the Warsaw Ghetto.When Poppy dies before revealing his past, Lederman is alarmed, and he begins to pester his grandmother for stories. Through this process he gains respect for his grandmother. As a budding journalist, Lederman had a burning desire to learn the full stories. "Never again" has special meaning to him as the atrocities are so close to his own life. I still find it terrible to read and to try to comprehend the cruelty we humans can inflict upon each other. Since the Holocaust, even more atrocities have occurred. When will we say "never again" and really mean it?

Michelle Obama's memoir of her life, focusing especially on her years of marriage to and life with Barack Obama and their foray into politics, eventually reaching the White House.

I started this book early in the COVID experience, when shelter-in-place was fairly new. At that time my mind was so distractible; I could not read coherently for a couple of months. During that time I put this book down. Later I came back to it and finished it. I truly admire Ms. Obama, but the book didn't light any fires for me. It was interesting, but I maybe should have read it when I was not affected by COVID-brain. 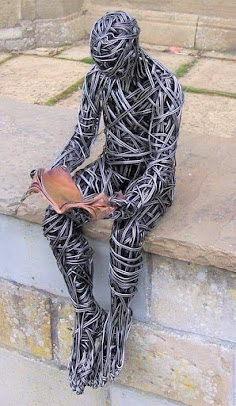 A Nephew and His Quilt

My nephew recently let me know that the quilt I gave him in 2007 has been well used and well loved -- so much so that it is now holey and threadbare. His girlfriend thinks it should be replaced. So.. of course, I felt inspired to send him a new one. This one was made about 4 years ago but has barely been used, so it's like new and is new to him.

He lives in California, with temps above 100 and smoky air surrounding him. Not really quilt weather! I was just happy to know it arrived safely. Now I know he has a blankie that is not threadbare. This was so much fun that I think I will send another one to another relative who has let me know how much he/she loves the original one I gifted long ago. My plan was to give every relative ONE quilt made by me. However, when Quilt Love is expressed, then I really don't mind gifting a second one. (In fact, I love it.) 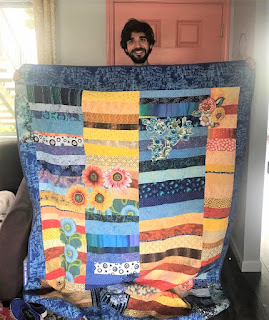 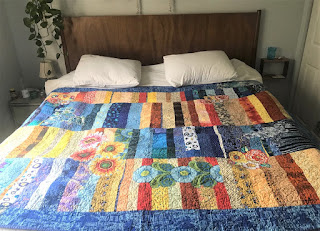 How to be an Anti-Racist by Ibram X. Kendi

Kendi walks us through his own journey of discovery as he explores where racism came from, what it really means, and how we need to re-examine our responses to it. Through the journey he learns to change some of his own habits and attitudes. He's very honest about what he learned about himself.

He also describes what we should all work toward which is focusing on policy. The results of racism are bad policies which harm entire groups of people. Our nation's attitude has become one of blaming the people, when in fact we need to blame the policies. He outlines some clear steps he followed along his own self-examination. He also lists the steps the rest of us can follow. It will require some hard work. But he ends on a hopeful note, assuring us that these changes are possible.A very thought-provoking book.
Inheritance: a Memoir of Genealogy, Paternity, and Love by Dani Shapiro
Not many memoirs are so riveting that I can hardly put it down. This one is. Shapiro's writing is beautiful. Her intelligence leads her to a thorough soul-searching and "new life" discovery as she suddenly at age 54 learns that her father was not her biological father. The story is captivating and spiritually rich. She now makes a podcast called "Family Secrets" which she handles equally as beautifully. I am captivated by her podcast as I was this book. 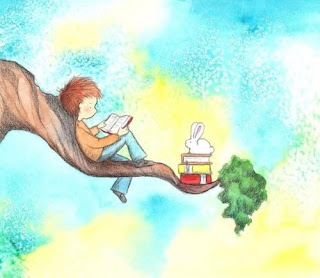 The COVID thing fogged my brain, and there were two full months in which I was not able to read. Now I'm back to reading like normal, and it feels great! I love books!
Posted by Carol E. at 3:17 PM No comments:

I listened to Dracula by Bram Stoker  on a podcast, read by Phoebe Judge. Podcast is called "Phoebe Reads a Mystery." I decided to give it a try, as it's an old classic that I had never read.

Well.. it's creepy! And sometimes interesting and sometimes boring. Sometimes it drags on, with lots of slow detail. I sometimes got the male characters mixed up in my mind.

The creepy parts are creepy. How does the human mind come up with this stuff? Vampires, and especially the way people must save them from themselves are a horrible thought. I suppose it comes from the fact that vampire bats really do exist. Then the imagination takes over from there. Wow.

There were a couple of main characters who are women. I did like that the circle of men around M.  respect her intelligence and include her in decision making (after at first excluding her under the guise of protecting her). She gives them a clear reason why she should be included, and they see her wisdom. Of course the overall attitude toward women was that they are the weaker sex and need protection. So the fact that they recognized and valued M's intelligence was important.

A side story is a doctor who works with "lunatics" in a hospital for insane people, aka insane asylum. He is curious and likes to learn about how the minds of "lunatics" work, but overall they are not given much respect. The straight jacket is employed frequently. Ugh. I'm so glad we have progressed a little in this field. Not enough, but at least we no longer refer to them as "lunatics."

What else can I say? Now I can say that I have read Dracula. I do not intend to ever read it again. My curiosity was satisfied, and the creepiness is in my past. 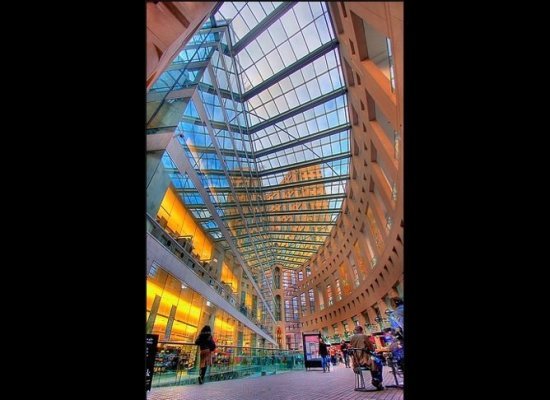 Vancouver Public Library
Posted by Carol E. at 11:42 AM No comments:

Trying Again... And I Read a Book!

After two dry months I finally managed to read a book! This COVID stuff has messed with my mind in a weird way so that I could not concentrate on reading. It has been very frustrating. I did finally manage to read this book: Chinese Cinderella, the True Story of an Unwanted Daughter by Adeline Yen Mah.
It was a memoir, a young adult book, so the reading was quick and easy to finish in a short time. Interesting story. The poor child's mother died shortly after giving birth to her, thus the family blames the baby and thinks of her as bad luck. Her own bad luck starts on that day and continues for years. It was very sad. But, here's a hint... the Cinderella part eventually does take place, and it's not just a sappy marriage to a prince.
I am hoping this blog entry will publish correctly. The new format threw me off last time. I now will attempt to show you some of the things I have been sewing during the pandemic shut-down. 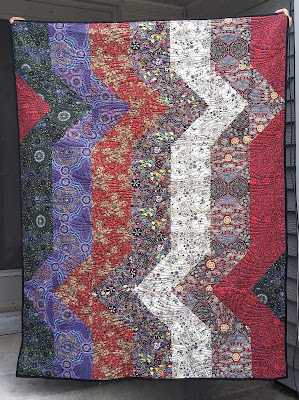 above: I made the top a while ago, but I finally got it quilted recently, and I am very happy with it. The pattern is Smudge by Villa Rosa. It is made of Australian fabrics so I count it as one of my souvenirs from traveling there in 2015. 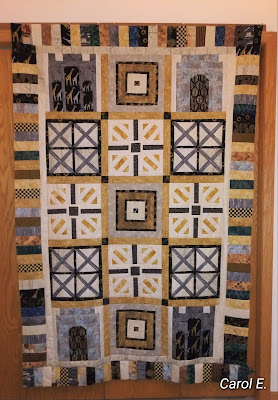 above: Some of you might recognize this. It is part of Gudrun Erla's pattern called A Stroll in Paris. She presented it in mystery format. I finished most of the project, but not all. I decided to just stop with these blocks and make my own piano keys border. Not sure what I will do with it. Keep or give away? 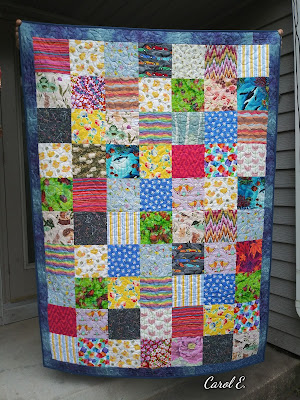 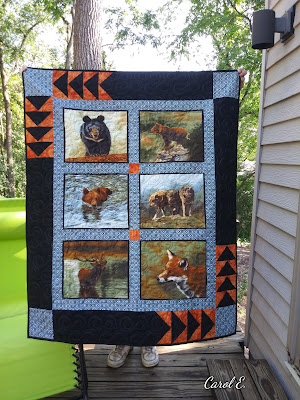 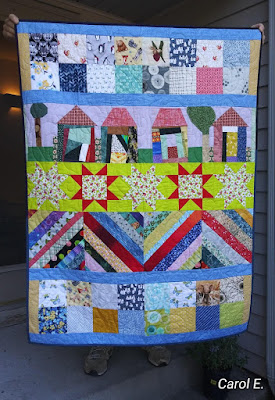 The three above were made for Quilts Beyond Borders. 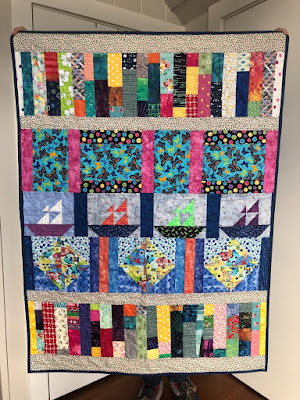 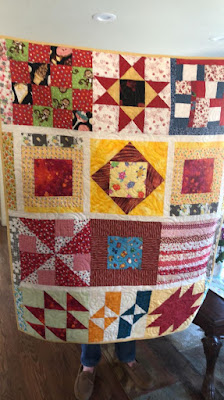 The above two are for Wrap a Smile.
This week I was able to spend a couple of days with my sister and cousin up at the cabin, so I feel that my summer has been a success. I got to swim in the lake, and that was my goal. When one's travels are restricted, the goals become quite tame. I was happy to achieve mine.
Posted by Carol E. at 7:05 PM 2 comments:

My little blog has been feeling neglected. I have not been inspired to write much. But I am still here! The pandemic and the self-quarantine have really messed with my interests. You know I love to read, but guess what? I have barely been able to read a thing for the last couple of months! For some reason I cannot settle down and give my full attention to a book! I'm perplexed and hope it will correct itself soon. Right now I am managing to listen to a book on the podcast, "Phoebe Reads a Mystery." She is reading Dracula by Bram Stoker. I have never read it in my life, so decided to listen to broaden my knowledge of classics. It has been a little creepy and then a little interesting in ways other than creepy. We're not done yet. She reads one chapter per day. I have been sewing. Here are some examples: Oh, wait! Blogger has changed its format! Where do I find the insert for sharing photos??? Sheesh... it's not even honoring my desire for paragraphs. I'm lost!
Posted by Carol E. at 2:21 PM 3 comments: