Taking Care of Each Other 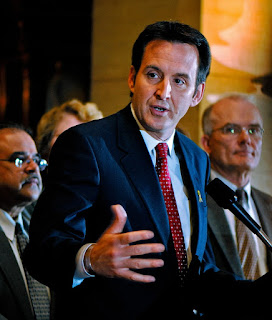 "Do I look presidential?"

Warning: I'm going to talk about politics. I'm not a political analyst or expert. I have opinions, though, and my core values that drive my opinions and my voting habits. So here goes.

Our current Governor, Mr. Tim Pawlenty, upon taking office too many years ago, promised he would not raise taxes. To that end, Minnesota has suffered greatly. Now he has proposed a budget that cuts social services, cuts health care for the poor, and cuts jobs. Oh, and also cuts taxes for businesses and for rich people.

Am I the only person who thinks this is upside down?? Whatever happened to caring about each other? Who says it's OK to cut services to people who are already down and out and have no other option? I'm thinking here of people I actually know... my students, for example... who rely on tax-supported health care and sometimes cash assistance or food stamps to keep them alive. I've got to think that Mr. P just has never met any of these folks and doesn't have an inkling of what their lives may be like. (I've tried to enlighten him with occasional letters, but apparently he doesn't read them. Or he just puts my name on his list of un-American subversives.)

Minnesota used to be a state known for its great education, social services, taking good care of its people AND high employment rate. I know, times have changed, but we have seemingly decided that it's OK to make the poor and helpless bear the brunt of trimming our expenditures.

People whine about taxes, but come on, folks... if everyone from middle and upper income brackets paid a little more, like $100 per year, most of us wouldn't even notice the pennies it would mean from each paycheck. But we would notice a happier, healthier state with fewer people losing their shirts and becoming homeless.

I want to live in a state that cares about people. I thought I lived in one, but it seems to be turning mean, and I don't like it one bit.

When Mr. P tries to run for president, please remember my warning: you'll think he's charming, but he doesn't like people who aren't rich. Beware of how you vote.
Posted by Carol E. at 9:06 PM

I don't live in your state but you made such a good point, thanks for sharing. I agree completely with your words.

I so agree with you. He is also making our children pay by deferring aid to our school districts.

I believe that karma will catch up with him at some point.

My dad saw him at Byerly's in Eagan on Sunday morning, reading a newspaper he had picked through at the newspaper stand. My dad told him to stimulate the economy by spending a $1 on the paper, to which TPaw said nothing and turned around and walked out the door.

MN has (had?) been one of my models for good governance in terms of having a really reasonable, humanitarian safety net. So sad to hear about the changes. It's so strange to that the phrase "raising taxes" makes so many people have a knee-jerk reaction, when, as you say, it's peanuts to most people who are better off. They just keep cutting and cutting out here in WA too.