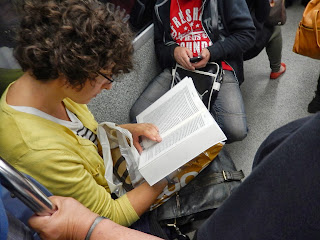 This week I have two books to tell you about. The first is The Sense of an Ending by Julian Barnes. I read this book on the flight home from Europe. It was a quick read, and I was able to read the whole book even before the flight ended.

This is the story of four boys who are friends in high school. The main character as an adult looks back, contemplating his past, his friendships, his failed loves, his marriage. As young boys they over-philosophize everything. One in the group is brilliant. His intelligence gets in his way; the main character's "ordinariness" gets in his way and causes some problems for himself and others... and yet I felt sympathetic toward him and the lack of answers he receives to some of his big questions.

At first I thought this book was a bit odd, but it grew on me. I related to the contemplation of one's past, both successes and mistakes. The main character learns that one can't re-do or un-do the past and the way it led to one's present situation. I give it 4 stars.

The other book, A Walk in the Woods by Bill Bryson... also gets 4 stars. This is one of Bryson's earlier books, the story of his hike along the Appalachian Trail. I read this book while in Europe. It was the perfect book to read during a vacation. It wasn't super deep. I could put it down and pick it up and not lose the train of thought. The writing is, I surmise, typical Bryson -- light hearted and often quite funny. He and an overweight friend find quite a few challenges while hiking the trail. Their original goal is to hike the entire trail, from Georgia to Maine. Their escapades are funny, especially in hindsight. Sometimes a challenge can be grueling and awful at the time, but funny when described later. That's kind of the nature of this book. it also entices the reader to get out into nature, do more walking, and learn more about our natural surroundings.