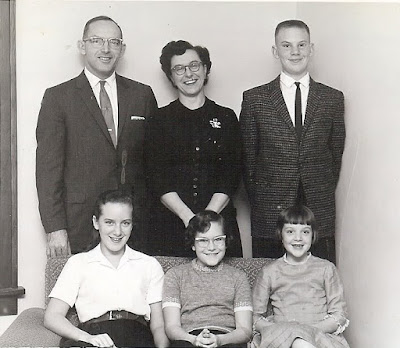 Recently I reconnected with my best friend from elementary school. Over the years we have heard bits and pieces of each other's lives. Sometimes our family members would see one or the other of us and pass along some information. But for the most part, for over 45 years, we have been mostly out of touch.

L. was the first girl I met when we moved to A-town. It was her birthday, and Mom sent me to her house for her birthday party, even though I didn't know a single person there! I was 5 years old, L was turning 6, which I did in another three months. We were best buds from then on, until my family moved away when L. and I were 12.

We enjoyed many hours of fun, creative, crazy, and sometimes naughty play. We were peas in a pod! We played Barbies, house, ran around outside, and once I remember we were "inventors" in her basement, pouring all kinds of kitchen liquids into jars in various mixtures and storing them on shelves. I was disgusted to see that they had all grown moldy after not too long a time! (I wonder what her mother thought of our experiments. Ha!) The movie, "Miracle Worker," came out during those years. L and I played Helen Keller, walking around as if we were blind and saying "wa-wa." We sat together in church and shook the church pews when we got the giggles over something crazy and then couldn't stop laughing. I was on my own, because Dad was the minister, and Mom sang in the choir. (She perfected the don't-be-naughtly glare from the choir loft, but I chose to ignore it.)

As we grew into pre-teens we were both totally boy-crazy, which we both maintained all through high school -- and both did no dating!

Fast forward to 2011. L's sister recently started attending my church, and we finally managed to get back in touch and to meet again. What fun! It was a real stitch going over our old memories and laughing about how we were still so much alike as adults. (We both are undiagnosed but both feel sure we have ADD.) We both ended up working in Special Ed in middle school and high schools. We both recently retired.

L. let me borrow several quilts and quilt pieces that she and her sister found in their mother's house. Their mother died not too long ago, just a few months shy of 100 years old. They have found quilts they don't remember ever seeing, and quilt parts that never got done, along with knitting projects and many other hand-made items. Sadly, they don't know the stories of most of the pieces they found. Some of them are obviously quite old, yellowed with age and fabrics are falling apart. Some are still in excellent condition.

It has been fun for me to see these creations of L's mother, but, of course, the most fun part has been re-connecting with L. Once one reaches our age (late 50s), the old memories are fun to re-hash and compare. I sent L. a picture of my Christmas ornament from 1959 which I remember getting in Sunday School. She said it looks familiar! She is expecting to find one just like it somewhere in her mother's house as they continue going through loads of stuff. (Her mother kept everything!)

My dad was a special person to L. and her family for a few reasons which I won't go into here.... suffice it to say, it is fun for me to hear L. speak of my dad in glowing terms. Next month it'll be ten years ago that my dad died! Hard to believe. He's still alive in my memories, and it's fun to hear others express warm memories of him, too.

It has been a fun reunion which has jogged my memory of many people and events in my young years that I had forgotten about. It almost seems like looking back into someone else's life. They are distant memories and yet seem like not so long ago, too. Was that little girl of so long ago really me??

It'll be fun for L. and me to continue our new/old friendship. Our lives cross paths in some interesting ways. I'm looking ahead to forming some new and fun memories to add to the old. 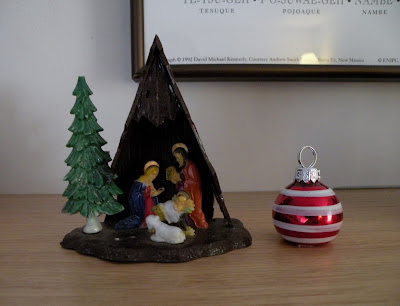 It is fun to keep up with old friends. Two of mine and me get together about every three months for lunch. We can hardly leave the restaurant!

The picture of the old ornament brought back memories.

My parents had the almost exactly the same ornament as the one on the right. Getting back with old friends is a neat experience. Very nice post.

Love that photo of your family. You still look like you! Not the same as that little girl, but easy to spot.