If nothing else good happens as a result of our change in president and U.S. government administration, at least I am becoming more aware, reading more newspapers, for example, and writing, calling, e-mailing my legislators and attending political events. I have never before been this involved.

Last Thursday I went to two events. One was a hastily-put-together protest of Trump's repeal of protections for transgender youth in our schools. It was not super well attended because of its last-minute nature, but it was a good rally, organized and run by youth. I was very impressed. Several high school and college-age youth spoke eloquently of their own stories, struggles, and joys. And four legislators made short appearances as they could between meetings inside the Capitol. One is a state senator and is a nephew of a friend of mine. It was nice to meet him in person. I have heard her speak proudly of him in the past. 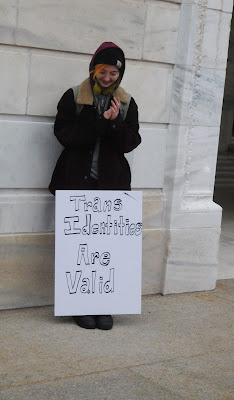 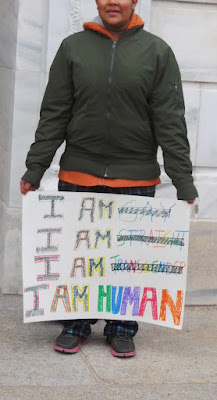 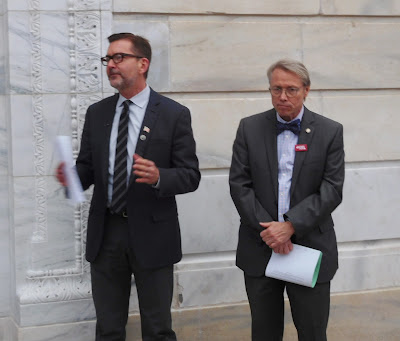 The man on the left, Senator Scott Dibble, is my friend's nephew. 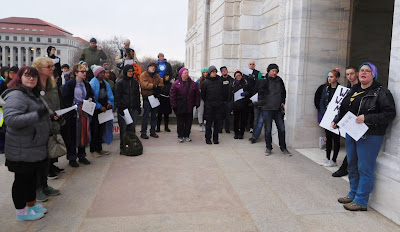 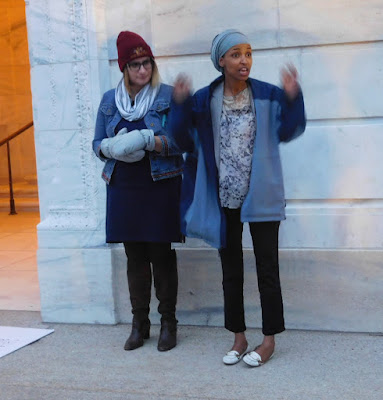 The woman on the right is Representative Ilhan Omar, the first Somali-American elected to a governmental position in the USA, I believe. She is wonderful! I'm so proud of Minnesota for electing her.

The next event of the day was a Town Hall With or Without our Elected U.S. Congressman, Jason Lewis. He was invited, but did not show up. He has very doggedly avoided our calls and has responded to all forms of contact with either total silence or with broad, very unspecific and generic letters that say nothing. He did hold his own version of a Town Hall meeting - by phone, and by invitation only. We are constituents with no voice! We had a good meeting without him, and for his benefit, taped the meeting. I hope he watches the tape! He works for us as well as for his rich, white, male friends! We will have to keep on reminding him of that.

The state capitol at dusk is beautiful, don't you agree?! 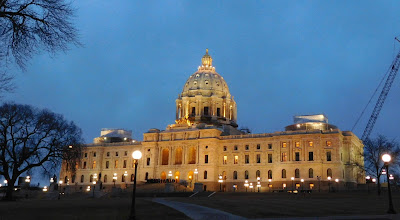 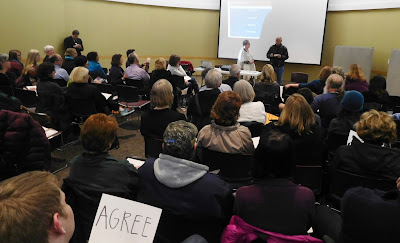 Recently I also attended a forum on homelessness, and tomorrow I will attend one on immigration. All this is keeping me busy and out of trouble!

I, too, have become more involved. I am reading more. That is the extent of it for now since I am recovering from surgery. But I hope to be more active in events and marches. Keep it up! There were 2 different town hall with or without Sen. Cory Gardner who declined to attend either of them. That is total BS that they won't respond to their constituents. They will rue the day that they ignored their employers.

You (and Paula, the Quilter) made me smile. Every bit of activist "outreach" helps! Thank you.

I've increase my actions too, as has my daughter. She went to a town hall by Senator Wyden where there were about 1000 people. She reported that quite a few raised their hands answering that it was their first town hall. Meanwhile, instead of the town hall, I attended a rally for immigrants and a panel discussion the annual "Everybody Reads" book, Evicted, by Desmond. Quite a moving book.