Norwegian by Night by Derek Miller

An American octogenarian and recent widower moves to Norway to live with his grand-daughter and her Norwegian husband. They think he has dementia, and it does appear that he's a little odd, but the reader will never know for sure if it's dementia or just lack of understanding between generations. He has a lot of clear (and muddled) thoughts which didn't seem consistent with dementia, but... I admit an ignorance about what inner life is like for a person with dementia.

There's a murder, an escape, a police chase all of which are quite interesting and not too thriller-ish, for which I was thankful. I don't usually enjoy mysteries and murders, but I loved this book. The old gentleman is pondering his years, especially the time he spent fighting in the Korean war. And he mourns his son who died in Vietnam. There are so many family and life issues in this book, adjustment to a new home, relationships and unknowns, plus it is quite captivating just to follow all that happens. I can give this book a strong recommendation. 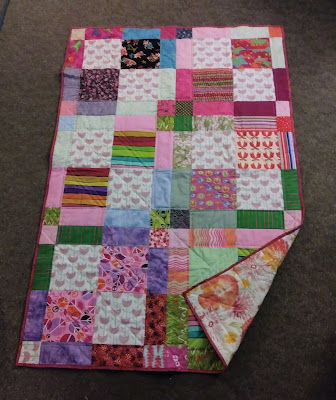 This quilt of mine has recently arrived in Guatemala and was donated to a child there.
Posted by Carol E. at 11:32 PM

I think you might enjoy THE CURIOUS CHARMS OF ARTHUR PEPPER.... just one of those quirky books! Love your reviews!

Thanks for the nice comment, Leanne, and for the book recommendation! I'll look into it.

proud of your contributions. the world needs more people like you