Mr. 38 grew up in a small town in Minnesota. As a kid he loved being outdoors, and he also loved to read. In high school Mr. 38 played football and was pretty good at it, and also was a percussionist in the summer marching band. He had a few, close friends and has kept in touch with them over the years.

38 went to college at University of Wisconsin, Stevens Point, where he majored in Natural Resources and also met the love of his life, Mrs. 38. He did not play football in college, but he took a badminton class and, to his surprise, loved it! He and Mrs. 38 love to play badminton in their yard with their friends and children. They have two children. 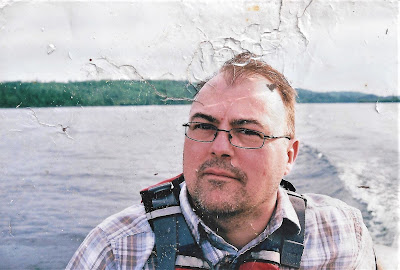 Mr. 38 works for the Minnesota Department of Natural Resources. He loves his job and loves his life back in Minnesota. Mrs. 38 is a librarian and is also a member of the local school board. His kids are 19 (Daughter), and 15 (Son) -- Daughter is in college at UWSP and Son is in high school. When the kids were young the family loved hanging out at their cabin, also camping in Minnesota state parks and national parks.

Mr. 38 loves the outdoors, he coaches the middle school football team, and he is a member of a Rotary club where he likes to help organize the annual chicken and corn feed (a fundraiser). He's pretty busy, so it's hard to find enough time to read, which he still enjoys.

One thing that Mr. and Mrs. 38 do not share together is his love of fishing. They have a cabin up north, and he loves to fish and bring home dinner. The rest of his family hates fishing, but they love eating his catch. He usually goes fishing alone, or sometimes with his old high school buddies. Sometimes Mrs. 38 sits on the beach reading or doing some hand sewing while he goes fishing.

This is Mr. 38 in late summer on one of his last fishing outings before the return to school and all that busy-ness. He convinced Son to go along. Son likes dabbling in photography and captured a few good shots of some ducks and a couple loons, in addition to this one of his dad.

Mr. 38 looks serious here, because he had been asking Son about the camera settings and was still in the conversation-about-cameras mode. Also, he has been grieving the loss of his father who recently died rather suddenly. He and his dad were close, and he is having a hard time with the loss. But, life goes on, and he has kids to raise. Plus, fishing and the chance to sit quietly surrounded by nature helps calm him and help him feel grounded.

I met the 38 family when Mrs. 38 and I attended a quilt retreat together, and later I ran into her again at a United Methodist Women gathering. I happened to go out to dinner with her and her whole family the last evening of the UMW event. What a nice family! They're all a tad on the shy side, but guess what... I love shy people. They are good listeners, and the whole family is super nice.


Why do I call him Mr. 38? Because I had to call him something. This story is complete fiction. I made it up. I found this photograph on the sidewalk today, smooshed and dirty, and I felt sorry for it, sitting there in the ice and snow. I brought it home and scanned it for you and made up this story. I call him Mr. 38 because on the back of the photo is stamped 38/50. Did I have you fooled??

Totally!! Good job! Now you need to make up another story about why the photo was on the sidewalk.

You tell a really good story!